Quick holds off stablemate to win the Astra Stakes 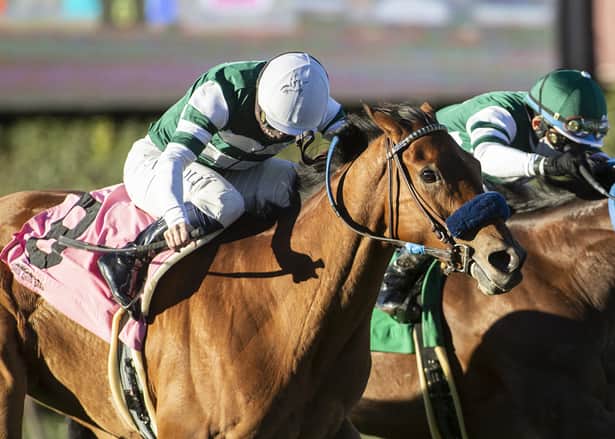 In the midst of a four-day riding suspension, Umberto Rispoli had but one mount on Sunday at Santa Anita and he made it count. In a furious stretch drive aboard the 9-5 favorite Quick, he held off her stablemate Hermaphrodite and Joel Rosario by a nose, giving Hronis Racing, LLC and John Sadler a one-two finish in the marathon Grade 3, $100,000 Astra Stakes, which Rispoli was eligible to compete in as it is a designated race.

In-hand while a joint third outside of her stablemate as the field came out of the Club House turn for its run up the backside, Quick was about two lengths off pacesetter Aunt Lubie.  At the 3 ½ furlong mark, Rispoli stepped on the gas and was three-wide turning for home outside Aunt Lubie and Carpe Vinum.  From there, English-bred Quick gained the advantage, while French-bred Hermaphrodite had to wait for room at the rail.

This proved the difference, as Quick survived by a diminishing nose right on the money.

“Pace was not that fast, so I had to make a decision to move,” said Rispoli, who is now tied with Rosario with a meet-leading four stakes wins through 12 racing days.  “I knew where I sat and I know her, she could go through.  She’s a galloper, when she moved again, I got lucky it was by the wire.  Sometimes you need luck in these things.

“…It’s always a pleasure, it’s probably not nice for him to hear it, but it’s always a pleasure to beat a jockey like (Rosario).  He’s so respectful, so nice.  I asked him after the wire, ‘Did you get me?’ because my head was down, and I was just focusing to try to win the race.  He said ‘No, no, you got it.’”

A solid third going a mile and three eighths on turf in the Grade 3 Red Carpet Handicap at Del Mar Nov. 26, Quick, a 5-year-old mare by Olympic Glory, broke through the starting gate prior to the break but she remained the favorite in a field of nine older fillies and mares, returning $5.80, $3.60 and $2.80.

She got the trip she needed today,” said Juan Leyva, assistant to Sadler.  “She got to relax, not be on the front end.  She settled well and got a perfect trip.  I think our other filly (runner-up Hermaphrodite) might have been a little better, but it worked out great, we ran one-two.”