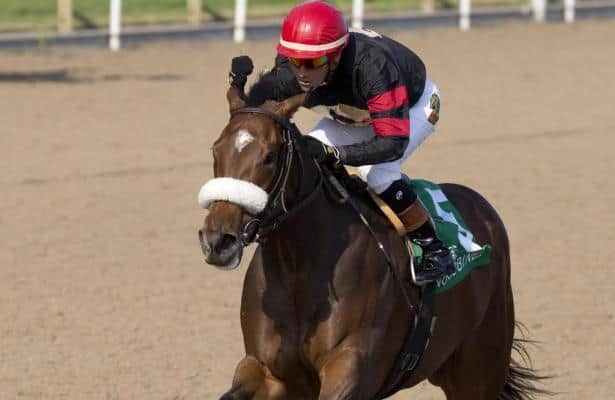 The 2017 Queen’s Plate, a 1 ¼ miles test for Canada’s top three-year-olds worth $1 million, runs Sunday at Woodbine. A field of 13 is slated to line up on the all weather track, headed up by the Woodbine Oaks winning filly, Holy Helena.

Picks for the Queen’s Plate can be found at Queen’s Plate 2017: Odds and Analysis from Zipse at the Track. The full field and morning line odds are below as seen on the HRN Stakes Tracker. 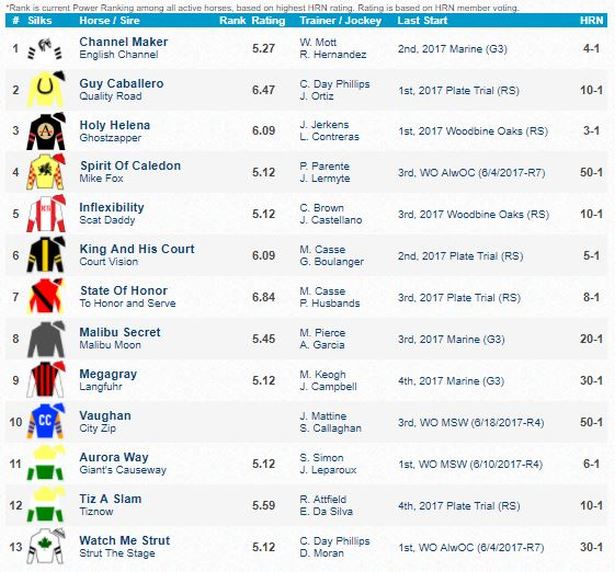 The morning line favorite is the Jimmy Jerkens-trained filly, Holy Helena. A daughter of Ghostzapper, Holy Helena made her race debut this year at Aqueduct and finished second. She came back to break her maiden next out at Belmont Park, but it was her Woodbine Oaks win that put her on the map for the Queen’s Plate. After sitting mid-pack in the Woodbine Oaks, she was able to rally for a length victory. The Queen’s Plate will be another step up in company, but it will also be a chance for Holy Helena to further her status as an up-and-coming filly.

Trainer Bill Mott hopes to accomplish his first Queen’s Plate win with Channel Maker. The English Channel gelding only has one win from eight starts, but has finished strong in his last two outings. At two, he won the Vandal Stakes at Woodbine in gate-to-wire fashion, beating Queen’s Plate rivals Malibu Secret, King and His Court, and State of Honor. Earlier this year he was second by half-a-length in a Keeneland allowance race on the turf, and was most recently second in the Grade 3 Marine on Woodbine’s all-weather. If his recent form holds true, Channel Maker has a shot to get back in the winner’s circle.

King and His Court is one of two Queen’s Plate contenders for Mark Casse. The Court Vision gelding finished out his two-year-old season by winning the Coronation Futurity and the Display Stakes, both at Woodbine. After an attempt on the Kentucky Derby 2017 trail, King and His Court returned to Woodbine to take the Wando Stakes and finish second in the Plate Trial over stablemate State of Honor, who will also run Sunday.

Canadian champion 2yo King and His Court had an impressive 5/8 work in :59.20 this morning under Gary Boulanger. #woodbine

Guy Caballero, the last-to-first upset winner of the Plate Trial, will attempt to sweep by the field again in the Queen’s Plate. While he had finished behind King and His Court as a two-year-old, the Quality Road gelding hopes to best the familiar rival again at age three.

What a guy! A hand's on experience for @CP24's @SteveAnthony as he bathes Plate Trial champ Guy Caballero! #QP17 #Canada150 pic.twitter.com/nFFANPinpJ