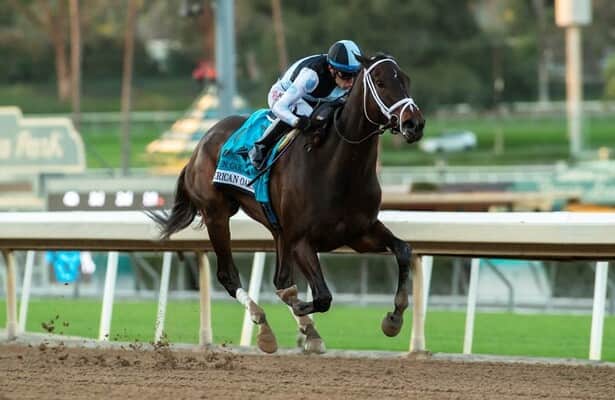 In her first start on dirt, trainer Michael McCarthy’s Queen Goddess handled the conditions with aplomb as she dictated the pace throughout and took Sunday’s off-the-turf, $300,000 American Oaks at Santa Anita by 2 3/4 lengths.

Ridden by Juan Hernandez, Queen Goddess got the 1 1/4 miles in 2:04.72. Originally designated as a Grade 1 at a 1 1/4 miles on turf, the eventual graded status of Sunday's running will be decided in the coming days by the American Graded Stakes Committee.

#9 Queen Goddess closes out the Opening Day card @SantaAnitaPark with a win in the G1 American Oaks for Trainer @mwmracing! @JJHernandezS19 aboard for @EclipseTBP. pic.twitter.com/bxB88vMWy4

Owned by Eclipse Thoroughbred Partners and TOLO Thoroughbreds, Queen Goddess, a Kentucky-bred filly by Empire Maker, picked up her first stakes win today and improved her overall mark to 6: 3-1-1. With the winner’s share of $180,000, she hiked her earnings to $303,080.

The disappointment in the race was heavily favored Going Global. Off at 4-5 with Flavien Prat, she knifed her way into contention five-sixteenths from home but came up empty in the drive, finishing sixth in her first try on dirt.