Puhich expects 'much improved' effort from Background in Indiana Derby 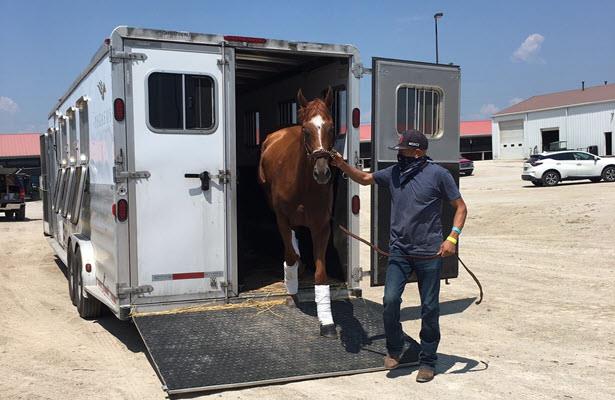 Trainer Mike Puhich is hoping his 3-year-old gelding Background is front and center after Wednesday’s $300,000, Grade 3 Indiana Derby. Background is 20-1 in the morning line for the field of 10.

Background is owned by the Giddyup Stables of Bob Rondeau, who retired three years ago after 37 years as the voice of the University of Washington athletics, and his wife Molly, an Indiana product whose grandparents lived in Shelbyville.

Puhich is based at the Pegasus Training and Rehabilitation Center just outside Seattle in Redmond, Wash., but this year is establishing a Midwest division that wintered in Arkansas and moved on to Kentucky. Background began his racing career at Arkansas’ Oaklawn Park, winning on his second attempt while stretching out to 1 1/16 miles, then alternated a pair of thirds with a pair of ninth-place finishes.

“If you look at his form, it’s pretty much similar to everybody else in the race,” Puhich said. “It’s a competitive race. Everybody’s still eligible for conditioned allowance races. They’re a cut below right now the top 3-year-olds in the country.

"But I think this is the kind of race where somebody is hoping to have their horse step up and go to that next level," Puhich continued. "But right now, we’re all on equal terms. I think it’s a real competitive race — a race we feel we’re going to be competitive in and that he fit in.”

Background last ran June 14 when ninth in an allowance sprint at Churchill Downs. Puhich was using the spot as a tightener for the 1 1/8-mile Indiana Derby but after that poor performance he thought a trip to Indiana Grand was out.

“He’s run a couple of disappointing races, but he’s had an issue with chronic allergies,” Puhich said. “His last start he had a lot of mucous. We tried a different type of herb on him. I was at wit’s end with him, and he responded really well to it. We were going to use that last race as a prep for this race, but I pretty much wrote it off the way he ran. But he responded to it and ’scoped really clean. We figured, ‘Let’s go up and take a shot.’

"He’s doing good," Puhich added. "He’s happy and as healthy as he’s been for a long time. So, we’re looking for a much-improved performance. He’s going to need it.”

The Indiana Derby winner will receive 20 points toward qualifying for the Sept. 5 delayed Kentucky Derby. While Background is nominated to the Triple Crown, Puhich said, “He’s got to be awful impressive to take that next step. But I think everybody in the race is hoping their horse does step up and shows something that ‘why heck, we can still be dreaming here.’ But right now, we’re going to focus on this race, and see what happens.”

In an excellent betting race — Arkansas Derby fourth-place finisher Winning Impression is the 3-1 favorite — there’s good money to be made to those who can handicap the Grade 3 race correctly.

Asked why horseplayers should use his horse, Puhich said, “Twenty-to-one is a really good price for him. I think he fits in there with anybody on paper, if you go back and look at his better races. If he runs his best race, he’s going to be right there.

“But I also think that it’s the type of race that after it’s over — no matter who wins — you can look at it and say, ‘Oh yeah, you can make a case for that horse.’ Because everybody’s got a live shot, in my opinion.”