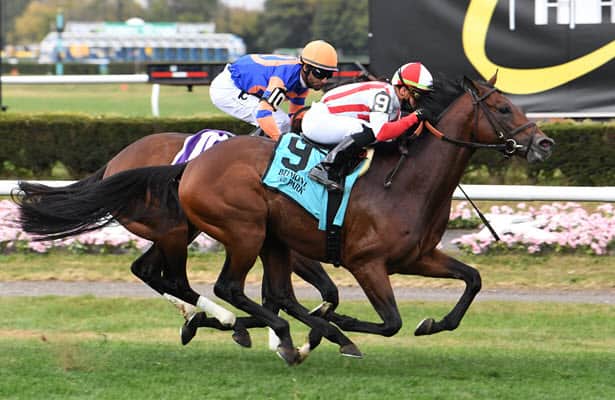 Public Sector entered the Hill Prince off a pair of Saratoga stakes scores, capturing the Grade 2 National Museum of Racing Hall of Fame on August 6 followed by the Grade 3 Saranac four weeks later.

The Hill Prince was the son of Kingman’s first start going as far as nine furlongs, but the added ground proved to be no issue for the talented bay colt as he found his best footing late to win by a neck. In doing so, he replicated the exacta from the last-out Saranac where he confronted Never Surprised in deep stretch to win by one length.

Public Sector left from post 9 and was angled closer to the hedge in third by jockey Irad Ortiz Jr., as a rank Never Surprised commanded the strung-out field into the first turn and registered an opening quarter-mile in 24.35 seconds over firm going.

Public Sector dropped six lengths back down the backstretch while Never Surprised marked the half-mile in 49.71 with 48-1 longshot It Can Be Done keeping close company in second.

Ortiz gave Public Sector light left-handed encouragement approaching upper stretch through three-quarters in 1:14.13 with Never Surprised still the one to catch. The Saranac runner-up held his advantage through the stretch run before being collared by Public Sector just past the sixteenth-pole, stopping the clock in 1:48.68.

Never Surprised finished 1 3/4 lengths ahead of It Can Be Done who held third.

“He has a great mind, this horse,” Ortiz said. “He switched off when I wanted him to and when I asked him to respond, he gave me a great turn of foot.”

Brown was full of praise for Ortiz as the two joined forces for their second stakes victory together this meet.

“The ride was really great by Irad. I know he’s a very talented horse, but he delivered a really top ride,” said Brown, who saddled his third Hill Prince winner. “For him to get him out and get good position and be clear and out of trouble was a great move. He was saving ground and ahead of a lot of the other runners in the race and he timed it just perfect. Up until the last moment he was focused on passing the pacemaker but was still taking peeks throughout the stretch to his right to make sure no one was coming.

“The bottom line is I think Irad had complete control of the whole field throughout the race,” Brown continued. “It was a magnificent ride and a real professional performance by both the horse and him.”

Never worse than second in 8-of-9 lifetime starts, Public Sector banked $220,000 in victory which increased his overall earnings past the half-million dollar mark to $598,600. During his juvenile season, Public Sector broke his maiden at first asking before finishing second in the Grade 2 Pilgrim at Belmont Park and a distant 12th in the Grade 1 Breeders’ Cup Juvenile Turf at Keeneland – his lone off-the-board effort to date.

The win was a fourth overall victory in the Hill Prince for Seth Klarman’s Klaravich Stables, who has won the event with three different trainers. Klaravich previously won with Subordination [1997; Gary Sciacca] and Outperformance [2006; Rick Violette Jr.]. Brown and Klaravich joined forces with 2015 victor Takeover Target.

Public Sector will seek to extend his streak of graded stakes victories and will target the $400,000 Hollywood Derby (G1) on Nov. 28 at Del Mar, a race that last year was won by Brown-trained and Klaravich-owned Domestic Spending.

“That was really the plan – win or lose,” Brown said. “As long as he ran well, we really thought he could follow the path Domestic Spending ended up getting out to the Hollywood Derby last year for his last start of the year.”