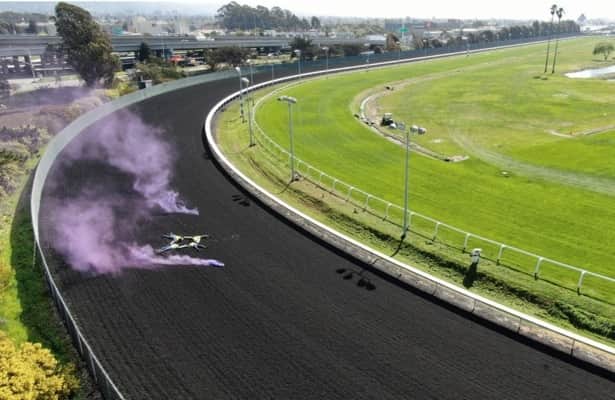 After being forced to postpone Thursday's program when four "animal-rights" activists infiltrated the track, Golden Gate Fields finally kicked off its card with the second race at 7:28 p.m. PST.

The start was some eight hours after the protest began by Direct Action Everywhere, which seeks to put an end to horse racing. In a field reduced to six with two scratches, Cajun Bettor finished best of all to win a three-way photo for trainer Bill McLean and pay $6.40.

The seventh and final race has a scheduled post of 10:00 p.m. local time.

Earlier in the day, a Facebook livestream showed the protestors scaling the perimeter fence on the far turn and stepping onto the Golden Gate track at about 11:30 a.m. PT, shortly after the harrows prepping the track had passed the area. The four protestors then laid on the ground and started to lock arms "between heavily-weighted PVC pipes in a direct action maneuver called a 'sleeping dragon,' the organization noted in a press release.

At that point, what appears to be a member of the track crew stepped to the protestors and tried to stop the maneuver, but was unsuccessful. Outside of the track on public property, a group of protestors calling for the shut down of Golden Gate was also gathered.

In a press release, Direct Action Everywhere said they're "calling for Golden Gate Fields to be shut down, citing dozens of horse deaths over the past year, as well as widespread COVID outbreaks among workers at the facility."

The group also alleged that "government and industry authorities have failed to address these issues, ignoring requests for enforcement action from Berkeley City Council and DxE."

Golden Gate's seven-race program was scheduled to start at 12:45 p.m. Pacific. At 3:15 p.m., Golden Gate announced the first race had officially been canceled with the remainder of the program "delayed until further notice."

Golden Gate Fields also currently serves as a mass vaccination site for COVID, but that also had to be shut down temporarily because of the protests. The track issued the following statement after the first race was canceled.

"Golden Gate is a firm believer in the right to protest. However, the current actions of the protestors have forced the closure of the onsite Covid vaccination clinic, and hundreds of people have already had their vaccinations canceled.

"We respectfully suggest to the protestors that there is a better way to have this conversation and air their concerns. We welcome the opportunity to have this discussion in the appropriate format.”

Trainer Jonathan Wong said horsemen had not received any further guidance from track officials as of 2 p.m. PST, but police were on the scene and "Golden Gate is doing everything it can to fix the situation.

"They haven't said anything. Right now we're all just on the front-side waiting around and talking," Wong said.

Later in the afternoon, shade fell on the protestors when a portable cover was placed above.