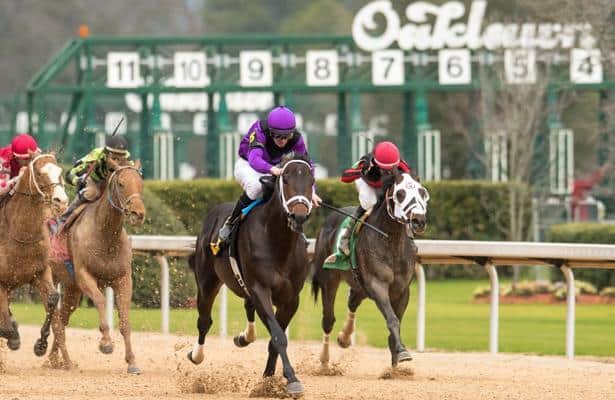 A bevy of Triple Crown nominees will be in action on Saturday at Oaklawn Park – not only in the $1 million, Grade 1 Arkansas Derby, but also in a trio of competitive maiden special weights on the card.

Indeed, half a dozen Triple Crown nominees will seek to break their maidens at Oaklawn on Arkansas Derby Day. Since you never know where Preakness and Belmont contenders might come from, let’s take a look at each candidate and review their credentials:

A first-time starter conditioned by high-percentage trainer Brad Cox, Amazing Rocket sold for $500,000 as yearling – hardly surprising since he’s a well-bred son of Into Mischief out of an Unbridled’s Song mare. The bay colt has shown speed in the mornings, most notably blazing five furlongs from the Oaklawn starting gate in a bullet :59 2/5 last month. With hot jockey Florent Geroux in the saddle, Amazing Rocket looms as a logical win threat on debut, though it’s worth noting Cox trainees frequently improve second time out.

Bob Baffert went 3-for-3 saddling maiden sprinters at Oaklawn last year, suggesting Following Sea is a major contender after shipping in from California. Sire Runhappy and dam sire Speightstown both were champion sprinters, and Following Sea flashed solid speed of his own when debuting in a six-furlong maiden dash at Santa Anita last month. After racing reasonably close to fast fractions of :21.75 and :44.94, Following Sea crossed the wire second behind his stretch-running stablemate Defunded, who came back to run fourth in the Santa Anita Derby (G1). With hot ultra-jockey Joel Rosario aboard, Following Sea should be tough to beat in his second start.

I profiled Global Appeal right before the stoutly bred son of Ghostzapper returned from a long layoff in a March 13 maiden sprint at Oaklawn, highlighting his sharp workouts and promising pedigree. To my delight, the D. Wayne Lukas trainee fired off a huge effort in his first start on dirt, tracking the pace before settling for second place by half a length at 40-1. Produced by the Aptitude mare Speedy Escape (previously the dam of Preakness starter Awesome Speed), Going Global has the pedigree to stretch out in distance down the road. But in the meantime, Brisnet Speed ratings suggest he’s fast enough to vie for victory in Saturday’s six-furlong sprint, making Global Appeal’s 8-1 morning line odds very enticing.

Shipping in from California for trainer John Sadler is Star Sailor, who has cracked the trifecta in three of his five starts against tough company at Santa Anita and Del Mar. This winter alone, Star Sailor has knocked heads with the future graded stakes-placed runners Hozier and Roman Centurian, so he’ll receive plenty of wagering support while cutting back in distance and dropping the blinkers he wore in a disappointing effort on March 5. Sadler strikes at a 24 percent rate with horses transitioning from routes to sprints, and Joel Rosario has been named to ride. What’s not to like? Star Sailor is an obvious threat to reach the winner’s circle.

Speaking of horses cutting back from routes to sprints, He’smyhoneybadger is making the same transition for trainer Brad Cox, who strikes at a lofty 28 percent rate with this move. Fifth by 2 1/2 lengths when racing 1 1/16 miles at Oaklawn last month, He’smyhoneybadger figures to appreciate dropping down to six furlongs, considering he’s a son of speedy sprinter/miler Daredevil out of a mare by Hopeful (G1) winner Majestic Warrior. Florent Geroux is named to ride, so count out He’smyhoneybadger at your own risk.

Two starts sprinting at Fair Grounds, two fourth-place finishes against quality competition. Continental Coins has flashed tactical speed for trainer Bret Calhoun and figures to secure a forward position in his two-turn debut. A son of Constitution out of the Dixie Union mare La Belle, Continental Coins has the pedigree to stretch out in distance, so don’t be surprised if he outruns his 6-1 morning line odds. After all, Continental Coins brings competitive Brisnet Speed ratings to the mix and breezed a snappy half mile in :47 4/5 on April 2, suggesting he’s in good form.