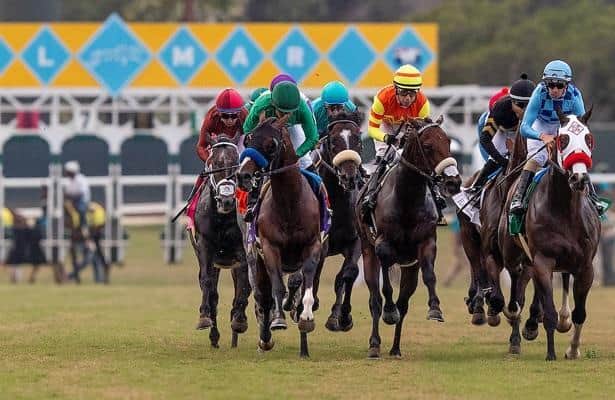 The upcoming Saturday cards at Del Mar and Saratoga each offer a deep and competitive maiden special weight for 2-year-olds. The fields are packed with promising first-time starters, and we’re highlighting eight of the biggest names to know in this week’s Prospect Watch.

It’s no wonder why Good News Rocket sold for $700,000 earlier this year; he’s a son of champion sprinter Runhappy out of Sue’s Good News, previously the dam of Breeders’ Cup Juvenile Turf Sprint winner Bulletin and Ogden Phipps Handicap (G1) winner Tiz Miz Sue. This bay colt is bred to be a star and bears watching for Hall of Fame trainer Bill Mott.

A Winchell Thoroughbreds homebred son of hot young sire Gun Runner, Echo Again was produced by the Tapit mare Teardrop, who already has found success as the dam of Pegasus winner and Triple Crown participant Pneumatic. Hall of Fame trainer Steve Asmussen has been hot at Saratoga this summer (winning at a 28 percent rate) and similarly successful jockey Joel Rosario is named to ride, stamping Echo Again as a win threat.

Hall of Fame trainer Shug McGaughey has entered a pair of horses in this deep field, with Spinzar being the less expensive entrant even though he sold for $450,000 as a yearling. The gray son of three-time leading North American sire Tapit is by a stakes-placed Medaglia d’Oro mare, so his pedigree is stuffed with classic stamina. Spinzar might not win on debut, but he has the potential to develop positively in the long run.

The second McGaughey trainee is Game Change, who brought $850,000 when sold as a yearling. As a son of Candy Ride (sire of champions Gun Runner, Game Winner and Shared Belief) out of a mare by Pulpit (the sire of Tapit), Game Change is bred top and bottom to develop into an effective performer over classic distances on dirt.

Less than one week before Bill Mott saddles Art Collector in the Charles Town Classic (G2), Mott will debut Art Collector’s half-brother Classic Legacy at Saratoga. The son of three-time leading North American sire Into Mischief was produced by Distorted Legacy (a stakes winner on dirt and Grade 1-placed on turf), so there’s a lot of class and potential in Classic Legacy’s pedigree.

After Hejazi breezed a furlong in 9.8 seconds at the 2022 Fasig-Tipton Midlantic 2-Year-Olds in Training Sale, a bidding war pushed his final price to $3.55 million, smashing the previous sale record of $1.8 million set by future champion Gamine. Only time will tell whether Hejazi can enjoy as much success as Gamine, but they share the same trainer (Hall of Fame conditioner Bob Baffert), and Hejazi’s bullet five-furlong workout in 59 seconds from the Del Mar starting gate last week suggests he has talent.

The second Baffert trainee in this field is Nullarbor, a son of Candy Ride and the first starter produced by the Distorted Humor mare Katherine. Nullabor enters off four straight five-furlong workouts at Del Mar and looks ready to factor on debut under hot jockey Juan Hernandez. According to Brisnet statistics, Hernandez has won at a 41 percent rate teaming up with Baffert in the last two months.