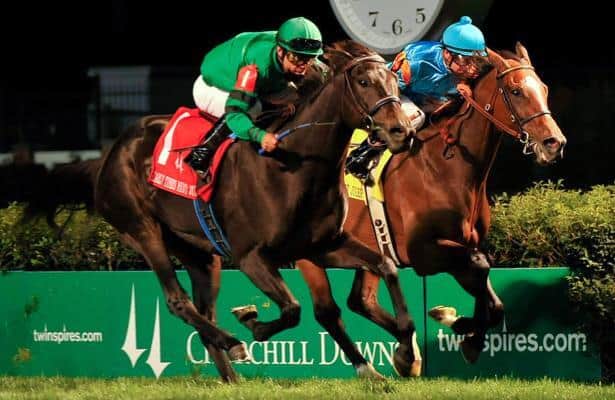 Thanksgiving week is always a busy one in U.S. horse racing. A bevy of stakes, many of them graded, are slated to take place from Thursday through Sunday.

The week is also packed with high-profile maiden special weights for 2-year-olds. There’s a good chance we’ll see a future Kentucky Derby starter or two in the entries, so let’s check out the fields and highlight seven of the best-bred newcomers, including half-siblings to Rachel Alexandra and Epicenter.

One of the classiest pedigrees you’ll see in the entries this week belongs to Onasa. A son of Kentucky Derby winner Always Dreaming, Onasa was produced by the Candy Ride mare Silent Candy, previously the dam of Travers (G1) winner and Kentucky Derby runner-up Epicenter.

Onasa sold for $140,000 earlier this year, before Epicenter was a national star. That price looks like a bit of a bargain in retrospect. Onasa has turned in quick workouts at Hawthorne for high-percentage trainer Larry Rivelli and looks like a threat to outrun his 8-1 morning line odds.

Pedigree: Tapit–Stopchargingmaria, by Tale of the Cat

Stamina is bound to be a strong suit for Shopper’s Revenge. Tapit is a three-time leading North American sire whose sons have won four editions of the Belmont Stakes, and dam Stopchargingmaria was a top-class filly who counted the Breeders’ Cup Distaff, Alabama (G1) and Coaching Club American Oaks (G1) among her major wins racing 1 1/8 miles to 1 1/4 miles.

Sprinting seven furlongs as a 2-year-old is unlikely to bring out the best of Shopper’s Revenge, but keep an eye on this gray colt in the long run. He’s bred to improve with distance and maturity.

Only time will tell whether Lady Irene can follow in the footsteps of her illustrious half-siblings, but the daughter of Kantharos breezed a quick half-mile in 48 seconds at Churchill Downs last week and can’t be dismissed from consideration. According to Brisnet stats, Kantharos sires an impressive 15 percent winners from first-time starters.

Entered two weeks ago but forced to scratch after landing on the also-eligible list, Medaglia Forever finally has a chance to flaunt her elite pedigree. She’s a daughter of Grade 1 winner and successful sire Medaglia d’Oro out of Forever Unbridled, who won the Breeders’ Cup Distaff and Personal Ensign (G1) on her way to being voted champion older dirt female of 2017.

This is a pedigree geared top and bottom toward success running long, so sprinting seven furlongs might be a little short for Medaglia Forever. But at least fitness shouldn’t be an issue, considering she’s turned in 19 timed workouts since the beginning of July. Regardless of how she performs in her first start, look for Medaglia Forever to follow the path laid out by her pedigree and improve with maturity.

Trainer Paulo Lobo and owner OXO Equine have teamed up to debut several expensive juveniles at Churchill Downs this fall, but the most exciting to date might be Itzos. A son of hot young sire Bolt d’Oro (who is siring 20 percent winners from first-time starters, according to Brisnet stats), Itzos was produced by Lotta Kim, famous as the dam of 2009 horse of the year Rachel Alexandra.

Itzos has put together a solid series of workouts at The Thoroughbred Center, capped off by a half-mile in 49.2 seconds. There’s a lot to like about Itzos, and although replicating the abundant success of Rachel Alexandra is a tall task, the bay colt is worth watching on debut.

Barnstorming is debuting in a dirt sprint, but his work tab is dotted with fast workouts and ultra-hot jockey Juan Hernandez is named to ride. Keeping in mind how Baffert wins at a 32 percent rate with horses debuting in maiden special weights (according to Brisnet stats), Barnstorming has to be viewed as a serious win threat.

The second first-time starter from the Baffert barn is Harlocap, a son of Baffert’s 2018 Triple Crown winner Justify. Purchased for $400,000 earlier this year, Harlocap arrives at Del Mar off a string of fast workouts at Santa Anita, including a recent five furlongs from the starting gate in 1:00.4.

Justify is siring 21 percent winners from first-time starters, according to Brisnet stats, and Hall of Fame jockey John Velazquez has the mount, so Harlocap figures to produce a highly competitive run on debut.