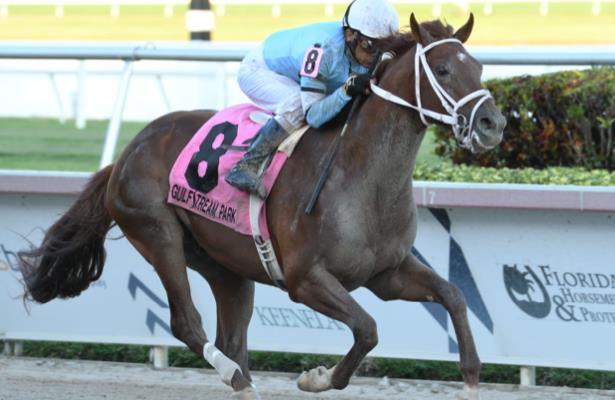 As racetracks continue to close across the United States, Gulfstream Park and Santa Anita will carry the major racing action this weekend.

The $750,000 Florida Derby (G1) at Gulfstream is the obvious highlight, but both tracks also will host maiden special weights packed with promising 3-year-olds. A particularly exciting prospect is Ragtime Blues, who has been training up a storm at Santa Anita for Hall of Fame conditioner Bob Baffert, while at Gulfstream a Friday allowance feature looks to produce a 2020 Kentucky Derby prospect or two.

Let’s dig in and review seven sophomores to follow:

We featured Money Moves prior to his winning debut on Feb. 15 at Gulfstream, where the son of Candy Ride rallied from mid-pack to score by 1 1/4 lengths. He didn’t run fast on the Beyer Speed Figure scale, receiving a 67, but his 84 Brisnet Speed Rating was a bit stronger. A son of the three-time stakes-winning sprinter Citizen Advocate, Money Moves sold for $975,000 as a 2-year-old-in-training and will retain the services of jockey Luis Saez, who has won nearly 100 races at Gulfstream this winter. As a son of Candy Ride, stretching out to a mile should be just fine for Money Moves, who will hope to take a step forward on Friday for hot trainer Todd Pletcher.

Trainer Jimmy Jerkens rarely wins with first-time starters, so it was significant to see Edge of Fire cruise to victory in his debut on Feb. 1 at Gulfstream, rallying from just off the pace to score by two lengths. He didn’t register high numbers either (67 Beyer, 85 Brisnet), but as a son of Curlin out of a Tapit mare, Edge of Fire is bred to thrive while stretching out in distance. Jerkens strikes at a hefty 24% rate with last-out maiden winners, so taking these factors together, Edge of Fire seems almost certain to take a big step forward on Friday. Count out this Ontario-bred chestnut, who could be one to watch for the Queen's Plate at Woodbine, at your own risk.

A son of Belmont Stakes runner-up Commissioner, Soros showed promise as a juvenile. After finishing second in his debut going a mile at Gulfstream Park West, the chestnut colt stepped up in class for the 1-mile Smooth Air Stakes at Gulfstream and delivered a strong effort, rallying to win decisively by 2 1/2 lengths. Owner OGMA Investments subsequently sold a portion of Soros to Eclipse Thoroughbred Partners, and while Soros hasn’t run since, the Gustavo Delgado-trained colt is clearly well regarded, as he’s cross-entered in Saturday’s Florida Derby.

Saratogian ran a big race in his debut on Feb. 8 at Tampa Bay Downs. The son of Belmont Stakes winner Empire Maker dueled for the lead through fast fractions of :22.52 and :45.67, then dug deep to hold off a late challenger and prevail by a nose. Saratogian should gain fitness from his tough effort first time out, and stretching out in distance looks like a positive. Trainer Rodolphe Brisset has enlisted jockey Florent Geroux to ride the $380,000 yearling purchase, who races for the partnership of SF Racing, Starlight Racing, Madaket Stables, Frederick Hertrich III, John D. Fielding, and Golconda Stables.

Bred in Washington by Todd and Shawn Hansen, this son of Uncle Mo is a half-brother to two-time Longacres Mile Handicap (G3) winner Stryker Phd. While there’s some speed in No Slo Mo’s pedigree, running long likely will be his forte, considering Uncle Mo tends to produce long-winded types and dam Striking Scholar is a daughter of stamina influence Smart Strike. No Slo Mo’s work tab isn’t overly eye-catching, and trainer Mark Glatt wins at just a 7% rate with first-time starters, so expect No Slo Mo to run his best down the road.

Sold for $500,000 as a yearling, Ragtime Blues is a stoutly bred son of Belmont Stakes winner Union Rags out of a mare by Kentucky Derby winner Street Sense. Ragtime Blues was an odds-on favorite to win his debut at Los Alamitos last September for Baffert but ultimately settled for second place behind next-out winner Howbeit. Ragtime Blues went to the sidelines immediately afterward and didn’t return to the work tab until January, but since then he’s been cranking out fast workouts like clockwork, including a bullet five furlongs from the starting gate in :59 2/5 on March 16. Expect Ragtime Blues to attract plenty of wagering support again on Saturday.

The second son of Uncle Mo entered in this six-furlong dash, Uncle Addouma was produced by the stakes-placed Cactus Ridge mare Mims Eppi, already the dam of Mr. Prospector Stakes (G3) winner Singanothersong. The latter was a capable sprinter, and Uncle Addouma could potentially follow the same path. He’s certainly shown speed in the mornings, firing off a half-mile from the Santa Anita starting gate in a bullet :47 2/5 on Sunday. Trainer Michael McCarthy has been hot at Santa Anita this winter, winning at a 27% rate, and leading jockey Flavien Prat has accepted the mount. Even though McCarthy wins at just a 7% rate with first-time starters, Uncle Addouma — a $145,000 auction purchase — should give a good account of himself on debut.