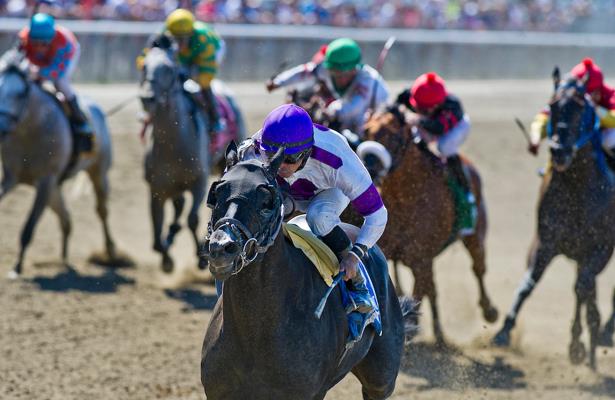 During a rather quiet week of racing in North America, one of the most interesting events on the agenda is a Friday maiden special weight for 2-year-olds at Belmont Park.

The 1 1/16-mile event has drawn nine juveniles to the fray, including a trio of well-bred first-time starters. It’s possible we’ll see a future Kentucky Derby contender or two in action, so let’s review four of the most notable names in the entries:

The first of two Todd Pletcher trainees in this competitive maiden route, Morethansoultitle is a son of elite sire More Than Ready out of the Perfect Soul mare Soul Title. The latter hails from a productive family, counting the graded stakes-caliber runners Title Ready, Seeking the Title, and Perfect Title among her siblings.

A Charles Fipke homebred, Morethansoultitle brings a lengthy but generally unremarkable work tab to his debut. He took a spin over the Saratoga turf course last month, suggesting he might have been considered for a run on grass. Overall, Morethansoultitle doesn’t appear cranked for a huge effort first time out, though with Hall of Fame jockey John Velazquez in the saddle, the chestnut colt nevertheless bears watching.

A son of brilliant Metropolitan Handicap (G1) winner Frosted, Ten for Ten sold for a hefty $410,000 as a yearling and showed definite potential in his Sept. 7 debut. The Shug McGaughey-trained colt broke slowly and raced off the pace in a 6-furlong sprint at Saratoga, then rallied with determination to finish clearly second-best.

Ten for Ten will add blinkers for Friday’s test, which could help sharpen his focus and tactical speed. Just as important, McGaughey strikes at a 25 percent rate with horses running long for the first time, suggesting Ten for Ten will be ready to fire a big shot with hot jockey Jose Ortiz aboard. There’s a lot to like about this exciting prospect.

You’d be hard-pressed to find a better-bred colt in the entries this week than Constitutional Law. A son of three-time leading sire Tapit, Constitution Law was produced by the Distorted Humor mare Baffled, already renowned as the dam of two-time Grade 1 winner and hot young sire Constitution. Tempted (G3) winner Jacaranda and Superlative (G2) victor Boynton are among Baffled’s other notable foals.

Trained by Todd Pletcher, Constitutional Law has been breezing steadily at Belmont Park, and while his workouts haven’t been particularly fast, he does have a quartet of 5-furlong moves to his credit. Fitness shouldn’t be a problem for Constitutional Law, who will be ridden by Luis Saez, a 23 percent winner when teaming up with Pletcher over the last 60 days. It’s also encouraging to note that both Tapit and Distorted Humor sire 15 percent winners from first-time starters, so Constitutional Law is bred to be a win-early type.

A son of two-time Horse of the Year California Chrome out of a mare by two-time Breeders’ Cup Classic winner Tiznow, Lotsnlotsofchrome is bred top and bottom to mature late and thrive over classic distances. As a result, Friday’s race figures to be more of a starting point than anything else, with bigger and better to come in 2021. Keep in mind, trainer Michelle Nevin wins at just an 8 percent rate with first-time starters.

On the other hand, Nevin has been absolutely on fire at Belmont this fall, going 6-for-19 (32 percent) so far. Lotsnlotsofchrome’s work tab features quick moves, including a near-bullet :48 half-mile from the Belmont training track starting gate on Oct. 8. With these factors in mind, perhaps Lotsnlotsofchrome is capable of outrunning his pedigree on debut.