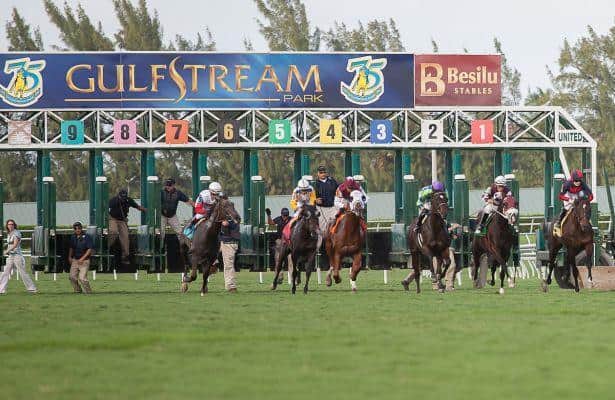 Although the current racing week has come up quiet in terms of dirt maiden races for 2-year-old colts and geldings — those high-profile events that produce future Kentucky Derby contenders — a grass maiden race for juvenile fillies at Gulfstream Park will do its best to compensate.

The one-mile turf test has drawn a stellar field of well-bred prospects to the mix, including first-time starters hailing from the stables of Graham Motion, Brian Lynch, Mike Maker and Mark Casse.

Let’s dig in and check out their credentials.

From top to bottom, Pangaea Proxima is bred to excel on turf. A daughter of successful stallion Temple City (sire of Grade 1-winning grass stars Miss Temple City, Bolo, and Annals of Time), Pangaea Proxima was produced by the Seeking the Gold mare Enthused, whose three previous stakes winners (and eight turf winners) include Saratoga Derby winner A Thread of Blue.

Pangaea Proxima has been training forwardly at Palm Meadows, most recently breezing a half-mile in :49 1/5 over the turf course. With accomplished Gulfstream rider Luis Saez in the saddle for trainer Graham Motion, an encouraging debut should be in the offing for this Flaxman Holdings homebred, who should only improve with maturity.

Caribe Bean Moka is another filly with the breeding to thrive on turf. Although her sire, Uncle Mo, is better known for his high-class dirt runners, he’s also responsible for Hollywood Derby (G1) winners Mo Town and Mo Forza, demonstrating his ability to sire high-class grass runners. Furthermore, Caribe Bean Moka was produced by the Medaglia d’Oro mare Coffee Clique, a four-time graded stakes winner who scored her signature victory in the Just a Game (G1) on turf at Belmont Park.

Owned by Amerman Racing and trained by Brian Lynch — the same team behind Coffee Clique — Caribe Bean Moka won’t necessarily be cranked to fire her best shot on debut. After all, her work tab looks a bit light, and trainer Brian Lynch strikes at just a 9 percent rate with first-time starters. But Uncle Mo was a champion juvenile and Coffee Clique won her debut as a 2-year-old, so perhaps Caribe Bean Moka will inherit some early-maturing genes and outrun expectations in her first start under colors.

Ken and Sarah Ramsey have bred and raced a bevy of stakes winner through the years, and if pedigree is any indication, Partisan Kitten will be the next. A daughter of the Ramseys’ turf champion and two-time leading sire Kitten’s Joy, Partisan Kitten was produced by Welcome Speech, a daughter of two-time European classic winner and Breeders’ Cup Classic (G1) runner-up Henrythenavigator.

This is a pedigree geared sharply toward success racing middle distances on turf, so the conditions of Saturday’s maiden heat should be perfect for Partisan Kitten. Her work tab has been modest for trainer Mike Maker (a 12 percent winner with first-time starters), so Partisan Kitten might need a race or two before finding her best stride. But on the bright side, two-time Eclipse Award-winning jockey Irad Ortiz takes the mount, stamping Partisan Kitten as an exciting filly to follow.

Silky Warrior is another filly bred top and bottom to thrive on turf. A daughter of the multiple Group 1-winning grass star and hot young sire Declaration of War, Silky Warrior was produced by Silky, a daughter of Prix de l’Arc de Triomphe (G1) winner and elite turf sire Montjeu.

Owned by Gary Barber, Silky Warrior has been breezing at Palm Meadows for Hall of Fame trainer Mark Casse, and while she’s yet to post any eye-catching times, she’s taken several spins over the turf course and should be plenty fit after turning in 21 workouts since the end of March. Casse strikes at a 16 percent rate with first-time starters, so look for Silky Warrior to show some potential on debut.