Prospect Watch: Monomoy Girl's brother an easy one to spot 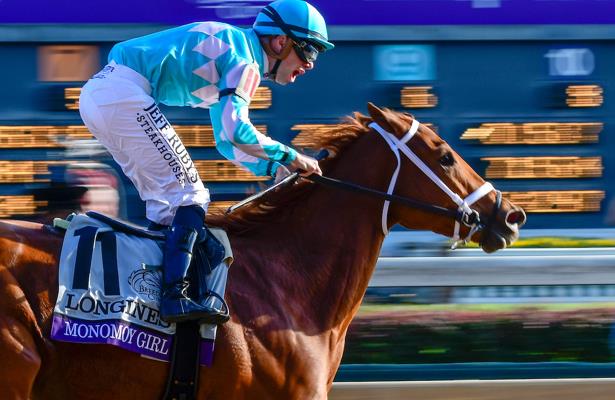 On a quiet weekend of racing during the lead up to the Breeders’ Cup, the major action for 2-year-olds will take place at Keeneland, where a multitude of high-quality maiden races are scheduled for Friday and Saturday.

A pair of six-furlong sprints for colts will attract most of the attention, though an identical race for fillies has also drawn a few exciting youngsters.

Here are eight promising prospects to add to your watch lists:

A daughter of acclaimed stallion Medaglia d’Oro, sire of 2009 Horse of the Year Rachel Alexandra, Raison d’Etre hails from a productive family. Her dam, Critikal Reason, is a half-sister to Kentucky Oaks winner Lemons Forever (dam of champion and Breeders’ Cup Distaff winner Forever Unbridled), and Critikal Reason has already produced the graded stakes-placed runners Bajan (third in the Grade 1 Santa Anita Oaks) and Virtual Machine (runner-up in the Grade 3 Westchester Stakes). Couple this attractive pedigree with a fast workout at the OBS Spring Sale of 2-Year-Olds in Training (she breezed a furlong in :09 4/5), and it’s easy to see why Stonestreet Stables spent $825,000 to acquire Raison d’Etre. Now trained by Brad Cox, Raison d’Etre has continued to show speed during morning workouts and is favored at 3-1 on the morning line to make her debut a winning one.

Purchased by Fox Hill Farms for $400,000 as a yearling, Tranquility Base is a well-bred son of Tapit out of the Tiznow mare Rote, the same mating that produced Royal Obsession, runner-up in the 2016 Gazelle Stakes (G2) and a competitor in the Kentucky Oaks. Tranquility Base has been breezing steadily at Churchill Downs for trainer Larry Jones, who wins at a solid 18% rate with first-time starters. With his classic-oriented pedigree, Tranquility Base could be the next star for Jones and Fox Hill Farms.

A $425,000 purchase price suggests Maximiliano has been well-regarded from an early age, and while he didn’t win his debut at Saratoga, he wasn’t disgraced, either. Sent off at 7-2, Maximiliano set the pace and raced a bit greenly around the turn before settling for second place behind runaway winner Gouverneur Morris, subsequent runner-up in the Breeders’ Futurity (G1). Trainer Wesley Ward will keep Maximiliano sprinting on Saturday, likely a wise choice as the son of Quality Road seeks to step forward in his second career start.

A son of Uncle Mo out of the Woodman mare Sue’s Good News, Newscaster is a half-brother to 2011 Breeders’ Cup Dirt Mile winner Caleb’s Posse and the tough Grade 1-winning mare Tiz Miz Sue. Considering his strong pedigree, Newscaster was disappointing upon debut at Churchill Downs three weeks ago — he was never remotely involved and finished seventh. But a slow start was his main issue, because he didn’t lose any ground down the homestretch, and trainer Steve Hobby will equip Newscaster with blinkers for his second start. If Newscaster shows more speed, he can improve off his debut.

Three runs, three runner-up efforts. That’s been the story so far for Elusive d’Oro, a son of Elusive Quality conditioned by Hall of Fame trainer Steve Asmussen. A $300,000 yearling acquisition, Elusive d’Oro knocked heads with some good horses during the Churchill Downs spring meet, finishing ahead of future Bourbon Stakes (G3) winner Peace Achieved on turf before switching to dirt and coming home second behind Scabbard, subsequent runner-up in the Saratoga Special (G2) and Iroquois Stakes (G3). Most recently, Elusive d’Oro was narrowly beaten in the Evangeline Downs Prince Stakes, so the drop back down into maiden company might be enough to trigger a breakthrough victory.

A troubled run in his debut at Ellis Park prevented Gold Street from contending for victory, but he upped his game significantly with a clean run at Churchill Downs last month, pushing a fast pace before finishing second behind the promising (and more experienced) Complexifier, who capitalized on a perfect setup. Could the third time be the charm for this Steve Asmussen-trained son of Street Boss? He looks best among the runners with racing experience, though Asmussen’s barn has been cold with juveniles in Kentucky as of late.

Trainer McLean Robertson wins at a 23% rate with first-time starters, which makes Marvin a potentially dangerous contender in this six-furlong dash. A son of Whitney (G1) winner Cross Traffic, Marvin posted some respectable workouts over the synthetic Polytrack at Arlington throughout the summer, but he’s fired off two of his fastest moves since transitioning to the dirt at Keeneland. On October 2 he traveled a half-mile in :47 4/5, and on October 5 he clocked five furlongs in 1:00 1/5. Both moves suggest Marvin will be ready to roll on Saturday.

If the name “Mr. Monomoy” reminds you of Monomoy Girl, the champion three-year-old filly of 2018, there’s a good reason why: Mr. Monomoy is Monomoy Girl’s half-brother. A son of Belmont Stakes winner Palace Malice, Mr. Monomoy — like his famous sibling — is trained by Brad Cox, who has called in Hall of Fame jockey Mike Smith to ride the well-bred youngster. With a couple of quick workouts under his belt (including five furlongs in a bullet :59 2/5 on September 27), Mr. Monomoy appears poised for a sharp debut and might go favored in the wagering thanks to the reputation of Monomoy Girl.