Prospect Watch: Code of Honor half-brother and 5 other debuts 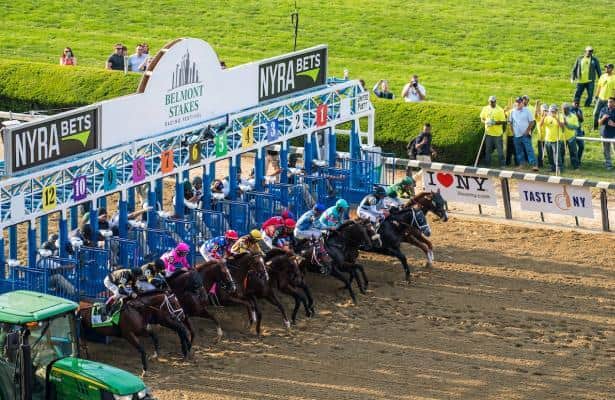 Although horse racing fans typically expect the most exciting racing action to take place on weekends, a couple of midweek maiden special weights at Belmont Park and Churchill Downs promise to spice up the transition from September to October.

A bevy of promising juveniles are set to debut, including a half-brother to 2019 Kentucky Derby runner-up Code of Honor. Let’s review half a dozen of the most promising prospects:

Todd Pletcher has been hot at Belmont this meet, going 8-for-29 (28 percent) so far, and Mo Donegal might be capable of giving Pletcher another victory. A son of champion juvenile and successful sire Uncle Mo, Mo Donegal boasts a pedigree that combines speed with stamina, giving the $250,000 yearling acquisition the potential to shine from an early age and still develop into a Triple Crown contender. He has put together a lengthy work tab at Saratoga in preparation for his debut and cannot be counted out of the mix.

Four-time Eclipse Award-winning trainer Chad Brown appears to have a promising colt on his hands in the form of Green Jacket. A son of elite sire and two-time horse of the year Curlin, Green Jacket is the first foal produced by Quiet Flirt, whose sire, Malibu Moon, is best known for siring 2013 Kentucky Derby winner Orb. Green Jacket has put together a solid work tab at Belmont Park and picks up Joel Rosario (a 21 percent winner this year), setting the stage for a strong debut.

Might Sidekick be a star in the making for hot trainer Shug McGaughey? Honor Code has been enjoying a banner year at stud, with Grade 1 winner Max Player and Maracuja among his best runners, while dam Reunited has already produced McGaughey’s multiple Grade 1 winner Code of Honor. This is a pedigree geared toward success running long, so Sidekick is unlikely to fire his strongest shot sprinting 6 1/2 furlongs on debut. But with time, Sidekick might develop into a Grade 1 star –perhaps even a 2022 Kentucky Derby contender.

Pedigree: Into Mischief—Artemis, by Empire Maker

The second Pletcher trainee in this deep field is a son of two-time leading sire Into Mischief out of the Empire Maker mare Artemis, who placed in the Grade 3 Santa Ysabel on the Road to the Kentucky Oaks. Owned in partnership by WinStar Farm and Siena Farm, Varatti has training forwardly on the New York circuit, turning in an encouraging series of workouts at Saratoga and Belmont. Jockey Luis Saez (a 25 percent winner when teaming up with Pletcher) is named to ride, stamping the bay colt as a logical candidate to win on debut.

If you are looking for a filly bred to show speed and win from an early age, look no further than Jaccaci. A daughter of Gormley, who won the FrontRunner (G1) as a juvenile, Jaccaci was produced by Beat the Blues, a capable sprinter who won or placed in three consecutive renewals of the Winning Colors (G2) at Churchill Downs.

It is possible Jaccaci will need to get a race under her belt before finding her best stride, considering Kenny McPeek wins at only a 6 percent rate with first-time starters. But McPeek has been hot at Churchill this meet, going 6-for-15 (40 percent) as of Wednesday, and Beat the Blues already has foaled two juvenile winners from two starters, so there is plenty to like about Jaccaci.

Remember Keen Pauline? Winner of the 2015 Black-Eyed Susan (G2) racing 1 1/8 miles, Keen Pauline is back in the headlines as the dam of Princess Pauline. Sired by Curlin, Princess Pauline is bred top and bottom to thrive over classic distances, so the Steve Asmussen trainee might not show her absolute best in a 6 1/2-furlong sprint. But it is hard to knock the steady work tab she has put together at Turfway Park, so perhaps Princess Pauline will outrun her pedigree out of the gate before improving by leaps and bounds with distance and maturity.