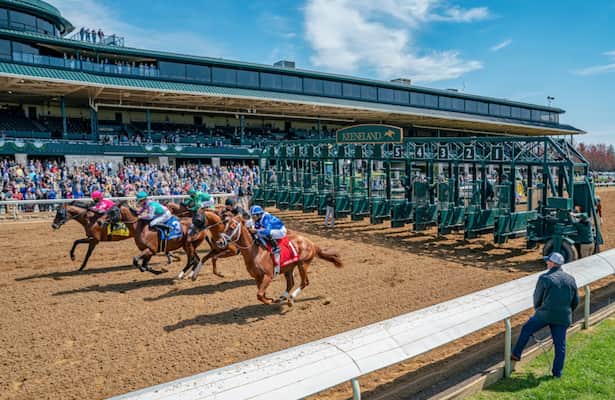 In horse racing, autumn doesn’t truly begin until Keeneland opens for its stakes-packed fall meet. This year, the action is particularly exciting because it culminates with the Nov. 4-5 Breeders’ Cup.

Find the next star with First-Timer Power Ratings

As usual, opening week at Keeneland is packed with high-profile graded stakes. But there also are a couple of maiden special weights for juveniles taking place over the main track, and among the promising first-time starters in the entries is a half-sibling to a Kentucky Derby winner.

Let’s highlight two colts and two fillies slated to debut during the first two days of the Keeneland meet.

Two-time Eclipse Award-winning trainer Brad Cox is set to debut Golden Bandit, a son of two-time Breeders’ Cup Sprint winner Midnight Lute. Although Midnight Lute was known for his speed, his progeny have enjoyed ample success running long through the years, with champion and five-time Grade 1 winner Midnight Bisou ranking as the best.

Golden Bandit posted a quartet of five-furlong workouts at Churchill Downs in September, including a bullet move timed in one minute. Under hot jockey Florent Geroux (a 26 percent winner at the recently concluded Churchill Downs September meet), Golden Bandit is a logical choice to challenge on debut.

It’s safe to say Mobster is bred to win from an early age. Sire Uncle Mo was voted champion 2-year-old male after winning the Breeders’ Cup Juvenile and Champagne (G1), and dam Meadow Breeze nabbed the Matron (G1) at age 2.

Meadow Breeze already has enjoyed success as a broodmare, foaling Marshua’s River (G3) winner Magic Star and Hopeful (G1) runner-up Royal Copy. Mobster has put together a solid work tab at Churchill Downs and can vie for victory if he runs to his early-maturing pedigree.

Alexa Lou is a daughter of Breeders’ Cup Sprint winner Speightstown out of Samantha Nicole, and if the name Samantha Nicole sounds familiar, that’s because she’s a full sister to 2009 Horse of the Year Rachel Alexandra.

Samantha Nicole won only a maiden special weight and an allowance from 10 starts, but the daughter of Medaglia d’Oro has achieved a bit more success as a broodmare, foaling Wasted Tears winner Fairchild. The latter filly is a daughter of Speightstown, so Alexa Lou boasts a stakes-winning full sister in her family tree. If Alexa Lou has inherited any of the abundant class in her bloodlines, she’ll be a filly worth watching.

One of the best-bred youngsters slated to debut this week is Humbling. A daughter of four-time Grade 1 winner and successful sire Quality Road, Humbling was produced by Above Perfection, previously the dam of Kentucky Derby winner Always Dreaming, Spinaway (G1) heroine Hot Dixie Chick and Demoiselle (G2) winner Positive Spirit.

Humbling breezed a bullet four furlongs from the Churchill Downs starting gate in 47.2 seconds last week, capping off a lengthy series of pre-debut workouts. The Brendan Walsh trainee sold for $1 million as a yearling and looks ready to deliver on the potential of her pedigree.