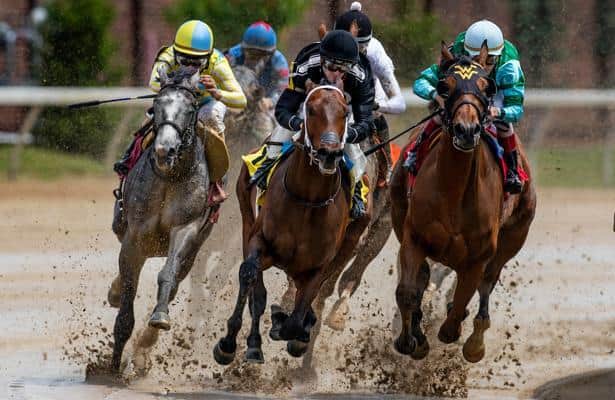 Another week, another round of competitive maiden special weights for juveniles taking place at Churchill Downs.

This week’s slate includes a five-furlong dash for fillies and a similar sprint open to all comers. Let’s check out the fields and highlight four of the best-bred first-time starters in the entries:

Remember Maximus Mischief, who ranked as an early Kentucky Derby favorite after posting a flashy victory against a promising field in the 2018 Remsen (G2)? Maximus Mischief wound up being retired with an injury before the Kentucky Derby, but perhaps his full brother Tulsan can rise to greater heights.

A son of three-time leading North American sire Into Mischief, Tulsan has posted decent workouts on the Kentucky circuit, including half a mile from the Keeneland starting gate in 48.8 seconds. Hall of Fame trainer Steve Asmussen has enlisted Churchill’s leading jockey, Tyler Gaffalione, to ride, so don’t dismiss Tulsan from win consideration.

From a pedigree perspective, there’s no telling what racing conditions will best suit Sivako. The progeny of sire More Than Ready have excelled over a variety of distances and surfaces, with turf miles a notable strong suit. Meanwhile, Sivako’s dam – Ruby Lips – has foaled Gerrymander (runner-up in the Frizette (G1) racing one mile on dirt) and Rocketry (a seven-time stakes winner racing 1 1/8 miles to 1 3/4 miles on dirt).

With this in mind, it might take a while for Sivako to find his ideal conditions. But on the bright side, trainer Brian Lynch has been hot at Churchill this spring (winning at a 29 percent rate), and Sivako’s work tab includes a quartet of half-mile breezes and one five-furlong move. Fitness shouldn’t be a concern, and Sivako might have the talent to factor on debut.

Without a doubt, one of the best-bred horses slated to debut this week is Summer Promise. A daughter of champion and successful stallion Uncle Mo (sire of classic winners Nyquist and Mo Donegal), Summer Promise was produced by Apple Blossom (G1) winner Dream of Summer, whose previous foals include Belmont runner-up Destin, Preakness third-place finisher Creative Cause, and Personal Ensign (G1) winner Vexatious.

Hall of Fame trainer D. Wayne Lukas doesn’t often win with first-time starters, but Summer Promise has shown serious speed in the mornings at Churchill Downs, twice breezing half a mile in less than 47 seconds. Don’t be surprised if Summer Promise challenges on debut and eventually evolves into a graded stakes star.

It’s a bit surprising that My Butterfly sold for only $70,000 as a yearling, because her pedigree contains serious speed and talent. She hails from the first crop of foals sired by Cigar Mile (G1) winner Sharp Azteca, and her dam is Rutledge Ballado, whose five stakes-winning or stakes-placed foals include Midnight Lute (G3) winner Silent Bird and Illinois Derby (G2) runner-up Morgan’s Guerrilla.

Trainer Wayne Catalano wins at just a 3 percent rate with first-time starters, but the lengthy work tab My Butterfly has compiled (11 workouts at Keeneland dating to March 17) suggests she’ll be fit enough for a respectable debut showing. If you’re looking for a live long shot worth including in your wagers, My Butterfly might be the one.