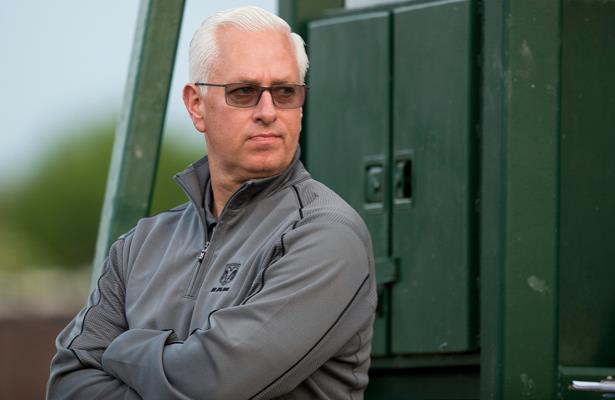 When it comes to 2-year-old racing this week, you can bet most handicappers will focus their attention on Churchill Downs, where a “Stars of Tomorrow” card exclusively for juveniles is slated to take place on Sunday.

But we would be remiss for failing to highlight a few other high-quality maiden events earlier in the week at Belmont Park, Keeneland and Santa Anita. Let’s review half a dozen promising 2-year-olds entered to race on Friday and Saturday:

Look up the definition of “regally bred” in a horse racing dictionary, and you might just find a photo of Plum Awesome. A daughter of two-time Horse of the Year and elite sire Curlin, Plum Awesome was produced by the Medaglia d’Oro mare Plum Pretty, winner of the 2011 Kentucky Oaks (G1). Plum Awesome’s pedigree is loaded with classic stamina, so it’s not surprising to see trainer Todd Pletcher debut the chestnut filly over a mile. She’s been training sharply, clocking a bullet 5 furlongs in 1:00 2/5 on Oct. 10 at Belmont, and hot jockey Luis Saez has been named to ride. Suffice to say, Plum Awesome is a threat to win on debut.

Although Kentucky Pharoah is debuting in a dirt sprint, his pedigree suggests turf will ultimately be his forte. A son of 2015 Triple Crown winner American Pharoah, who is siring quality grass runners left and right, Kentucky Pharoah was produced by the Strut the Stage mare Strut the Course, winner of the Dance Smartly (G2) and Canadian (G2) running long on turf. Kentucky Pharoah has shown speed in the mornings and might fire a good shot on debut, but look for this Calumet Farm homebred to improve when trying turf in the future.

A son of leading sire Into Mischief, Mandaloun is a Juddmonte Farms homebred produced by the Empire Maker mare Brooch, a two-time group stakes winner running a mile or farther on turf in Ireland. This is a pedigree that combines speed with stamina, so Mandaloun has the potential to develop into an elite classics contender for ultra-hot trainer Brad Cox. The bay colt already has shown promise in the mornings, most notably blazing a bullet 5 furlongs from the Keeneland starting gate in :59 flat. Florent Geroux (a 27% winner when teaming up with Cox) takes the mount, so you can bet Mandaloun will receive plenty of wagering support on Saturday.

Sold for $210,000 as a yearling, Macron hails from the first crop of Metropolitan Handicap (G1) winner and promising young sire Frosted. His dam is Rehocracy, whose six previous winning foals include Matriarch (G1) winner Egg Drop, a three-time graded stakes winner on grass. Conditioned by Hall of Fame trainer Steve Asmussen, Macron showed promise when breezing a bullet half-mile from the Keeneland starting gate in :59 1/5, a quick move suggesting the gray youngster has the talent to factor on debut. Asmussen’s go-to jockey Ricardo Santana takes the mount, and Santana might have to pull out all the stops to ensure Macron doesn’t get caught wide while breaking from post 11.

It’s safe to say Classier is bred to be a classy classics contender. A son of 2003 Belmont Stakes (G1) winner Empire Maker out of a mare by 2006 Preakness (G1) champion Bernardini, Classier boasts an elite pedigree and understandably sold for $775,000 as a yearling. Hall of Fame trainer Bob Baffert has sent Classier through a long series of fast workouts at Los Alamitos and Santa Anita, culminating with 6 furlongs in a bullet 1:12 2/5 from the Santa Anita starting gate. Owned by the high-profile partnership of SF Racing, Starlight Racing, Madaket Stables, Golconda Stables, Siena Farm and Robert E. Masterson, Classier looms as the runner to beat.

Sold for $1.05 million as a yearling, North Pole arrived with high expectations for his Aug. 16 debut sprinting 5 1/2 furlongs at Del Mar. Bet down to 28-10, the son of Pioneerof the Nile was always prominent chasing the pace but settled for second place behind future Speakeasy Stakes runner-up Wyfire. It was a mildly disappointing performance, but after taking time off in September, North Pole has bounced back with three encouraging workouts. Breezing 5 furlongs in :59 4/5 on Oct. 17 hints North Pole is ready to rebound for hot connections Simon Callaghan and Flavien Prat, who have gone 4-for-6 (67%) together in the last 60 days.