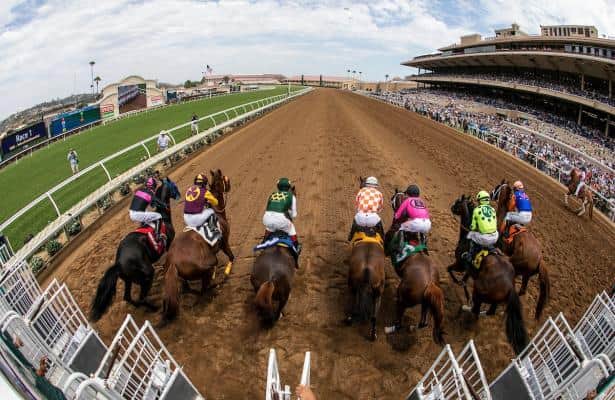 The final Saturday in July brings another round of competitive maiden special weights for 2-year-olds to the table. A bevy of promising young prospects are set to debut, including pricey auction acquisitions representing Hall of Fame trainers Bob Baffert and Todd Pletcher.

Here is a review five of the most promising names to know:

This quality pedigree brought a final bid of $300,000 when Master Game sold at auction as a yearling. Placed in the care of Todd Pletcher, Master Game has been training forwardly at Saratoga, capping off a solid work tab with five furlongs from the starting gate in 1:00 3/5. Pletcher wins at a 21 percent rate with runners debuting in maiden special weights, and three-time Eclipse Award-winning jockey Irad Ortiz Jr. is named to ride, stamping Master Game as a logical threat for victory.

Although Kevin’s Folly sold for only $80,000 as a yearling, it is hard to knock his pedigree. The Tom Amoss trainee is a son of two-time leading sire Distorted Humor (who sires 15 percent winners from first-time starters) out of the Vindication mare Santa Vindi. Vindication was an undefeated champion 2-year-old who won the Breeders’ Cup Juvenile, while Santa Vindi already has found success as the dam of Flexibility, winner of the Jerome (G3) and runner-up in the Remsen (G2) on the Road to the Kentucky Derby.

Kevin’s Folly has put together an impressive work tab dating back to April, including a swift five furlongs in 1:00 2/5 at Saratoga two weeks ago. Amoss wins at a 24 percent rate with horses debuting in maiden special weights, and hot jockey Tyler Gaffalione is named to ride, so don’t count Kevin’s Folly out of the mix.

Remember Isabella Sings? The daughter of Eskendereya was a high-class turf miler, winning half a dozen stakes (four of them graded) for trainer Todd Pletcher. On Saturday at Saratoga, her first foal – the Curlin colt Sweeping Giant – will debut over 1 1/16 miles on turf at Saratoga, conditions that would have suited Isabella Sings just fine.

Sold for $350,000 as a yearling, Sweeping Giant has been breezing pretty steadily since April, turning in a dozen timed workouts. His latest two moves have come over the turf training track at Saratoga, capped off by seven furlongs in 1:29.40. Jockey Joel Rosario is named to ride, and since Rosario and Pletcher have gone 5-for-11 (45 percent) in the last 60 days, we have to view Sweeping Giant as a key contender to win on debut.

Since 2016, trainer Bob Baffert has gone 31-for-77 (40 percent) debuting juveniles during the summer at Del Mar. So you can bet Grace Adler will receive plenty of support when she debuts at the seaside oval on Saturday.

A daughter of elite sire Curlin, Grace Adler was produced by the Newfoundland mare Our Khrysty, a stakes-winning juvenile sprinter who matured well enough to win the 1 1/16-mile Turnback the Alarm Handicap (G3) as a 4-year-old. This is a rock-solid pedigree, so it is no wonder why Grace Adler sold for $700,000 as a yearling. She has been training well in preparation for her debut, most recently clocking a bullet five furlongs from the Del Mar starting gate in :59 1/5, so don’t be surprised if Grace Adler dashes home on top at a short price.

It is safe to say Astronomer is bred to be a high-quality racehorse, but whether he’ll excel on dirt or turf, or thrive in sprints or routes, or mature early or late remains to be seen.

Astronomer is a son of Air Force Blue, who won a trio of Group 1 sprints as a juvenile in Europe before failing to train on as a sophomore. But Astronomer’s dam, Qaraaba, peaked at age 5 when she won the Robert J. Frankel (G3) racing 1 1/8 miles on turf. And Qaraaba’s previous foals include Sands Point (G2) winner Californiagoldrush (a Grade 1-placed turf router) and Zenyatta (G2) winner Harvest Moon (a quality dirt router), both of them best at age 3.

In short, there’s no good way to predict how Astronomer will perform on Saturday. Trainer Simon Callaghan wins at a 20 percent rate with first-time starters, so Astronomer’s lengthy work tab hints he will be ready for a competitive effort on debut.