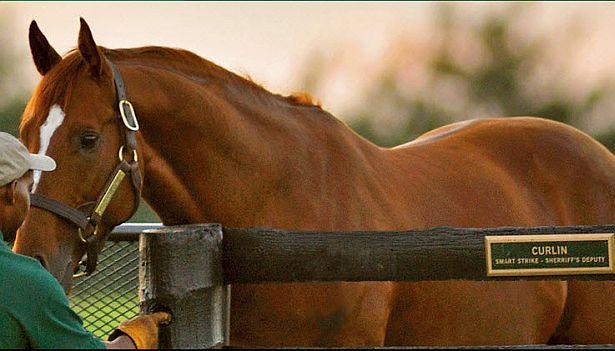 Any way you slice it, two-time Horse of the Year and successful stallion Curlin is poised to enjoy a massive week on the 2-year-old racing front.

Could one or more of these promising youngsters develop into contenders for the 2021 classics? You never know. Let’s highlight the four Curlins plus one other well-bred 2-year-old in this week’s prospect watch:

With a pedigree stuffed full of classic stamina, A C Expressway is definitely bred like a potential Kentucky Derby contender. His sire is Mineshaft (by Belmont Stakes winner A.P. Indy), the 2003 Horse of the Year responsible for such long-winded progeny as 2011 Florida Derby (G1) winner Dialed In and 2010 Belmont Stakes runner-up Fly Down. His dam is Hewlett Bay, an unraced daughter of 2005 Preakness/Belmont winner Afleet Alex. Sprinting 7 furlongs probably won’t be ideal for A C Expressway, but on the other hand, he’s shown plenty of speed in the mornings for hot trainer Norm Casse. A solid effort should be in the offing.

A Stonestreet Stables homebred, Alejandro boasts an extraordinarily elite pedigree. Sired by Stonestreet’s 2007-08 Horse of the Year Curlin, Alejandro is the first foal produced by Stonestreet homebred Spinaway (G1) winner Rachel’s Valentina, in turn a daughter of Stonestreet’s 2009 Horse of the Year Rachel Alexandra. Hall of Fame trainer Steve Asmussen (who conditioned both Curlin and Rachel Alexandra) has sent Alejandro through a lengthy series of workouts at Churchill Downs, including a couple of quick 5-furlong moves, suggesting the beautifully bred youngster is ready to roll on debut.

It’s safe to say this $800,000 yearling purchase is bred to be an elite racehorse. A son of Curlin, Scarlet Fusion was produced by the French Deputy mare Scarlet Tango, who has already foaled King’s Bishop (G1) winner Visionaire, Hutcheson (G3) winner Madison’s Luna, Providencia (G3) winner Scarlet Strike, and Santa Margarita (G1) winner Tara’s Tango. Under the care of Mark Casse, Scarlet Fusion has been training steadily on the Kentucky circuit, most notably clocking 5 furlongs in a bullet 1:00 3/5 on Sept. 9. With hot jockey Tyler Gaffalione in the saddle, Scarlet Fusion figures to receive plenty of wagering support in his debut.

A Juddmonte Farms homebred conditioned by Hall of Fame trainer Bill Mott, Millefeuille is bred to be a classy prospect. A daughter of Curlin, Millefueille is the first starter produced by the unraced War Front mare Bandana, in turn a daughter of Grade 1 winner and Breeders’ Cup Sprint (G1) runner-up Honest Lady, making Bandana a half-sister to Forego Handicap (G1) winner First Defence. With this quality pedigree in tow, Millefeuille figures to draw attention in her debut, though her relatively easy work tab to date hints she’ll benefit from the experience of a race.

Purchased by Peter Brant for a hefty $925,000 as a yearling, American West is a daughter of Curlin out of the Congrats mare Jacaranda, who defeated future Grade 1 winner Paulassilverlining by 3 1/2 lengths in the 2014 Tempted Stakes (G3). This is a pedigree with potential for success running long, which is probably why four-time Eclipse Award-winning trainer Chad Brown is choosing to debut American West over a mile. Brown strikes at just an 11 percent rate with this move, and American West’s work tab isn’t overly flashy, so she probably isn’t cranked for a peak effort first-time out. But down the road, this chestnut filly could be one to watch.