Prospect Watch: 9 to know as Belmont and Churchill open 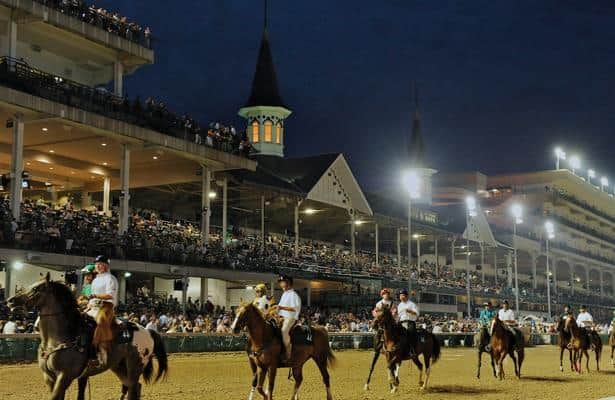 The Belmont Park fall meet and the Churchill Downs September meet begin on Thursday, bringing with them a bevy of high-class maiden special weights for juveniles.

The entries are stacked with well-bred colts and fillies, and this week’s edition of Prospect Watch highlights nine of the most promising.

Almanzo’s work tab is certainly promising – he has shown speed at Turfway Park and Ellis Park, most notably clocking five furlongs from the Ellis starting gate in 1:00 1/5. But his pedigree is even more exciting: Dam American Story already has foaled two stakes winners, including the multiple Grade 1-winning sprinter American Gal. The latter matured early enough to place in the Breeders’ Cup Juvenile Fillies at age 2, so Almanzo has the potential to show talent from an early age.

There’s a lot to like about Afjan’s pedigree, since he hails from a highly productive female family. Dam Scarlet Strike won the Providencia (G2) and placed multiple times at the Grade 1 level, while Scarlet Strike’s dam, Scarlet Tango, placed at the stakes level and is widely acclaimed for producing Grade 1 winners Visionaire and Tara’s Tango plus Grade 3 winner Madison’s Luna. That’s a lot of talent packed into one pedigree, so if Afjan displays anywhere near the ability of his immediate ancestors, he can develop into a star.

Can Atlantic Dancer take two-time Kentucky Derby-winning trainer Nick Zito back to the spring classics? The pricey yearling purchase certainly has the pedigree to excel on the Derby trial. Sire American Pharoah swept the Triple Crown in 2015, while dam Slow Sand already has foaled Tampa Bay Derby (G2) winner King Guillermo. Atlantic Dancer’s work tab isn’t overly eye-catching, and Zito rarely wins with first-time starters, so don’t expect Atlantic Dancer to strike on debut. But in the long term, he might be a good one.

It’s safe to say there’s serious class in Protonic Power’s pedigree. Protonico is the sire of Medina Spirit (first across the finish line in the 2021 Kentucky Derby), while Sheza Smoke Show is the dam of runaway Del Mar Debutante (G1) and Chandelier (G2) winner Princess Noor. The latter was an elite 2-year-old, and Protonic Power could develop into the same after putting together an encouraging work tab at Belmont Park.

No. 7 Please Be Kind

Pedigree: Violence – Include Me Out, by Include

Trainer Paul McGee isn’t a frequent winner with first-time starters, so Please Be Kind is unlikely to be cranked for a peak effort on debut. However, the daughter of juvenile Grade 1 winner Violence does have the pedigree to be a classy sort in the long run. Dam Include Me Out was a versatile filly who won the Santa Margarita (G1) on dirt and the Clement L. Hirsch (G1) on synthetic, so Please Be Kind is eligible to appreciate a variety of conditions.

Let’s see … Flatter is the sire of champion West Coast plus Grade 1 winners Flat Out, Taris, Paola Queen and Search Results. And Co Cola is none other than the dam of Search Results, runner-up in the Kentucky Oaks and winner of the Acorn (G1) earlier this year. This means Search Engine is a full brother to Search Results, so you can bet expectations will be high for this pricey auction acquisition.

A Juddmonte Farms homebred conditioned by Eclipse Award-winning trainer Brad Cox, Star Alignment is a full-brother to Juddmonte star Bonny South, winner of the Fair Grounds Oaks (G2) and runner-up three times at the Grade 1 level. Star Alignment’s work tab is not overly flashy, but on the bright side, Munnings sires 16 percent winners from first-time starters.

Pedigree: Giant’s Causeway – Game for More, by More Than Ready

Stamina figures to be the name of the game for Giant Game. The progeny of sire Giant’s Causeway win at a lofty average distance of 8.1 furlongs, while dam Game for More already has foaled multiple graded-stakes winner Isotherm (whose signature victory came over 1 1/4 miles) and the Grade 1-placed Gio Game (who did her best work running one mile or farther). We can’t really expect Giant Game to show his best sprinting seven furlongs on debut, but he does enter off a pair of bullet workouts so there might be more speed here than first meets the eye.

One of the most expensive youngsters entered to race this week is Bloodline, who brought a final bid of $600,000 when sold as a yearling. The son of juvenile champion and acclaimed stallion Uncle Mo was produced by the A.P. Indy mare A. P. Dream, previously the dam of stakes winner and Breeders’ Cup Sprint participant Wind Fire. This a regal pedigree rich with classy bloodlines, so the aptly named Bloodline looks like one to follow off a series of quick workouts at Ellis Park.