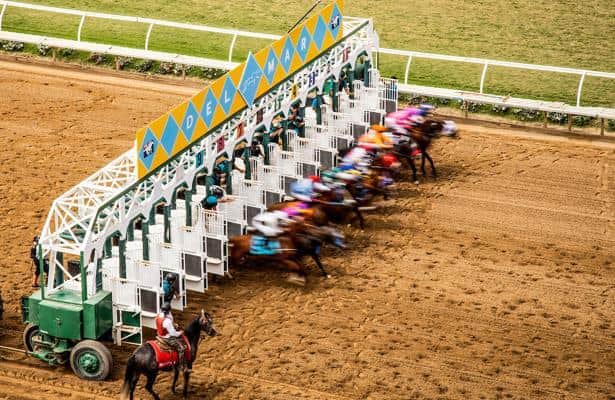 A bevy of expensive and well-bred horses are slated to debut at Del Mar and Saratoga this week. And Ellis Park is getting in on the act with a deep maiden special weight for juveniles.

Among the runners in the entries are siblings to Grade 1 winners Frosted, Hoppertunity, and Smiling Tiger. Let’s dig in and explore nine of the most exciting new names.

Pedigree: American Pharoah–Refugee, by Unaccounted For

Talk about a sensational pedigree. American Refugee is a son of Triple Crown winner American Pharoah out of Refugee, whose four stakes-winning foals include Clark H. (G1) winner Hoppertunity and multiple Grade 1 winner Executiveprivilege. American Refugee enters off a couple of sharp workouts at Del Mar (including six furlongs in 1:12.8 seconds) and can’t be dismissed for trainer Bob Baffert, who wins at a 30 percent rate with first-time starters.

Remember Frosted, the 2015 Belmont Stakes runner-up who went on to post a jaw-dropping victory in the 2016 Metropolitan Handicap (G1)? Frosted was a standout for owner Godolphin, and perhaps his half-brother Last Cookie can follow a similar path. The son of Preakness winner Bernardini clocked a quick half-mile from the Ellis Park starting gate in 47.4 seconds last week, but he has the pedigree to improve steadily with distance and maturity. There’s a lot to like about Last Cookie.

A son of four-time Grade 1-winning dirt star Quality Road, Sundance was produced by the Bernardini mare Cherry Lodge, who placed in a couple of graded dirt stakes (including the Spinaway (G1) at Saratoga) before winning an off-the-turf renewal of the Ladies’ Turf Sprint at Gulfstream Park. This is a pedigree packed with speed, so don’t be surprised if Sundance (an $800,000 yearling acquisition) shows spark from an early age.

Pedigree: Tapit–Points of Grace, by Point Given

Sold for $250,000 as a yearling, Arthur’s Ride is a son of three-time leading North American sire Tapit out of Dance Smartly (G2) winner Points of Grace. Tapit is primarily known for siring dirt stars, but Points of Grace was best on turf and has foaled Natalma (G1) winner Victory to Victory and Ginger Brew winner Alittleloveandluck. Both of those stakes stars achieved their signature successes on grass, so don’t be surprised if Arthur’s Ride eventually proves best on turf as well.

Here’s another productive pedigree. Point Proven is a son of Horse of the Year and hot young sire Gun Runner out of Secret Jewel, a Bernardini mare who has already achieved success as the dam of Beaumont (G3) winner Twenty Carats. Point Proven blazed five furlongs from the Saratoga starting gate in 59.4 seconds last week and will be guided on debut by hot jockey Irad Ortiz Jr., suggesting Point Proven is a formidable win threat for high-percentage trainer Todd Pletcher.

Trainer Michael McCarthy wins only 8 percent of the time with first-time starters, but Dr. Soulfire might have the potential to factor on debut. The son of champion West Coast was produced by Midst, previously the dam of Thoroughbred Club of America (G2) winner Inthemidstofbiz. West Coast was all about stamina, but Inthdmidstofbiz was a speedy sprinter, so Dr. Soulfire has the pedigree to thrive over a variety of distances. He’s posted encouraging half-mile workouts and warrants watching.

Sold for $650,000 as a yearling, Carmel Road has been training up a storm for Bob Baffert, wrapping up his preparations with a bullet five furlongs from the Del Mar starting gate in 59 seconds. The son of Quality Road was produced by six-time stakes winner Inspired and will be ridden by Juan Hernandez, a 46 percent winner teaming up with Baffert over the last two months, according to Brisnet statistics. All signs suggest Carmel Road might be something special.

Arguably the best-bred horse in the entries this week is Hawker. The chestnut colt sold for $675,000 as a yearling at least in part because he’s a son of Triple Crown winner Justify out of Flaming Heart, a daughter of Belmont Stakes winner Touch Gold. Flaming Heart won a couple of stakes running long on dirt, but her stakes-winning produce are Belmont runner-up Commissioner and Breeders’ Cup Sprint runner-up Laugh Track, so Laughing Heart’s foals can clearly excel over a variety of distances. The only thing missing from Hawker’s bloodlines is early maturity; he’s bred to improve with age, so regardless of how he performs on Saturday, Hawker warrants watching for next year.