Prospect Watch: 7 to follow at Del Mar, Ellis and Saratoga 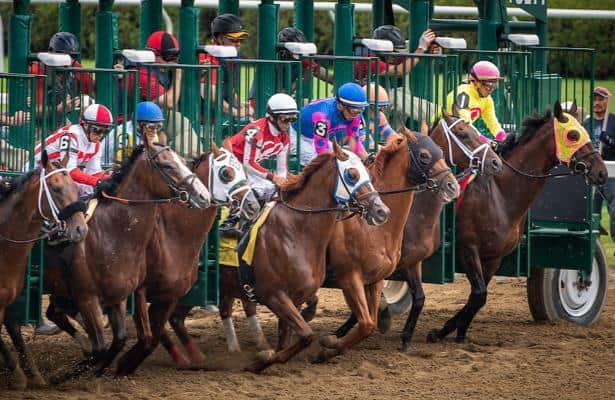 The second week of August is absolutely packed with competitive maiden special weights for 2-year-olds. A seemingly countless number of promising prospects are slated to debut at racetracks across the country, including Del Mar, Ellis Park and Saratoga.

Let’s check out seven of the most exciting names to know.

Remember Frosted, the 2015 Belmont Stakes runner-up who went on to post a jaw-dropping victory in the 2016 Grade 1 Metropolitan Handicap? Frosted was a standout for owner Godolphin, and perhaps his half-brother Last Cookie can follow a similar path for the same stable. The son of Preakness winner Bernardini recently clocked a quick half-mile from the Ellis Park starting gate in 47.4 seconds, but he has the pedigree to improve steadily with distance and maturity. There’s a lot to like about Last Cookie, who scratched from a similar maiden heat at Ellis last week.

Pedigree: Into Mischief–Inspired by Grace, by Curlin

Sold for $850,000 as a yearling, General Jim boasts a pedigree to match his flashy purchase price. The bay colt is a son of three-time leading North American sire Into Mischief out of Inspired by Grace, a stakes-placed daughter of two-time Horse of the Year Curlin.

This is a pedigree combining brilliant miler speed with classic stamina, so General Jim has the potential to develop into a Kentucky Derby type for Hall of Fame trainer Shug McGaughey. General Jim has shown speed in the mornings (breezing a bullet four furlongs from the Saratoga starting gate in 48 seconds) and looks like an exciting colt.

It’s a bit surprising that Black Rain sold for only $32,000 as a yearling, since his pedigree is solid overall. Sire Connect won the Cigar Mile (G1) Handicap and Pennsylvania Derby (G2), while dam Sustained has already foaled Quick Call (G3) winner Turned Aside and Sir Barton winner Ethereal Road. (Granted, the latter runner achieved his success after Black Rain sold.)

Only time will tell whether Mc McGregor can live up to his lofty lineage, but the Bill Mott trainee clocked a quick half-mile from the Saratoga starting gate in 47.6 seconds last month and looks like a promising colt to follow in the long run.

There’s a lot of class in the pedigree of Cave Rock. He’s a son of champion and Breeders’ Cup Classic winner Arrogate out of Georgie’s Angel, who matured early enough to win the Adirondack (G3) at Saratoga as a juvenile.

Cave Rock is living up to his lineage with an impressive series of workouts at Santa Anita and Del Mar. He’s cranked out five straight bullet five-furlong workouts (four of them from the starting gate) with times ranging from 59 seconds to 59.4 seconds. This Bob Baffert trainee looks ready to roll on debut.

After breezing a furlong in 10.2 seconds prior to the Ocala Breeders’ spring sale of 2-year-olds in training, Ultimate Gamble brought a final bid of $1.75 million. We can only speculate that his name might be a reference to his lofty purchase price, but from a pedigree perspective, Ultimate Gamble isn’t much of a gamble. He’s a son of elite sire Medaglia d’Oro out of Eltimaas, previously the dam of champion and Breeders’ Cup Sprint winner Drefong.

Ultimate Gamble has trained strongly in preparation for his debut and will be guided by Hall of Fame jockey Mike Smith, who has gone 5-for-22 (23 percent) at Del Mar this meet. If Ultimate Gamble lives up to his pedigree and workouts, he’ll have a bright future as a racehorse and stallion.

The second Bob Baffert trainee in this deep field sold for $700,000 as a yearling and is living up to his price tag with a sharp series of workouts at Del Mar. Last Sunday, the son of Kentucky Derby winner Nyquist sped five furlongs from the starting gate in a bullet 59 seconds.

According to Brisnet statistics, Nyquist sires a solid 14 percent winners from first-time starters. Throw in the fact that Nyquist won three Grade 1 races during a championship juvenile campaign, and Truehood has the breeding to win from an early age. With hot jockey Juan Hernandez (a 24 percent winner at Del Mar) named to ride, Truehood is arguably the horse to beat on Saturday.