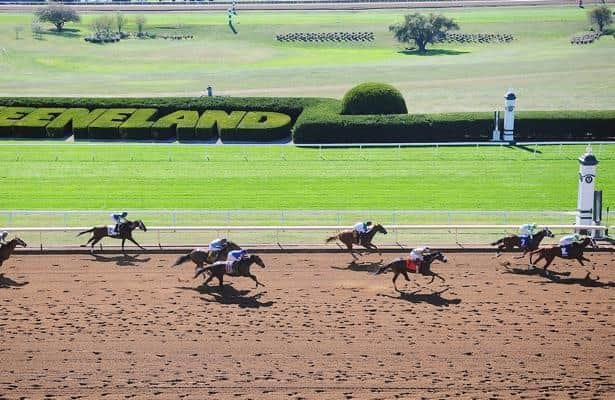 The Keeneland fall meet is in full swing and a bevy of competitive maiden special weights for 2-year-olds are slated to take place this week.

After examining the entries for Thursday, Friday and Saturday, we’ve identified half a dozen of the most promising unraced youngsters slated to debut:

Let’s see … Gun Runner sires 32 percent winners from first-time starters and is the leading sire of juveniles this year, and Brazen Persuasion was an early-maturing filly who won the Schuylerville (G3) at age 2. Any way you slice it, Ruggs is bred to win from a young age.

Although Ron Moquett wins at only an 8 percent rate with first-time starters, Ruggs has been training sharply for his debut, most recently clocking a near-bullet half mile in :47.2 seconds at Churchill Downs. An encouraging effort should be in the offing.

All Choked Up’s pedigree suggests he can factor on debut. Klimt isn’t off to as hot a start at stud as Gun Runner, but he’s eligible to sire early-maturing juveniles, considering he won the Del Mar Futurity (G1) and Best Pal (G2) at age 2. Meanwhile, Neverthesame is the dam of debut-winning juvenile Mo d’Amour (later a stakes winner) and Colonial Creed (who placed against stakes company as a 2-year-old).

James DiVito wins at an 18 percent rate with first-time starters, and All Choked Up has flashed speed in the mornings, most notably clocking five furlongs in :59.4 at Churchill Downs. Doesn’t this sound like the recipe for a competitive effort

Pedigree: Uncle Mo–Geeky Gorgeous, by Devil His Due

It’s surprising to see Oiler listed as a 10-1 shot on the morning line, since the bay colt brings an excellent pedigree to the table. His sire, Uncle Mo, is a top-level stallion who sires 15 percent winners from first-time starters. And Oiler’s dam is Geeky Gorgeous, who won half a dozen stakes and more than $500,000 during her accomplished career.

Both Uncle Mo and Geeky Gorgeous were competitive against stakes company as juveniles (Uncle Mo even won the Breeders’ Cup Juvenile), so Oiler figures to be competitive from an early age. He did breeze a quick five furlongs in 1:00.8 seconds at Keeneland earlier this month, so don’t be surprised if Oiler outruns his odds.

No. 7 Fast and Flirty

Pedigree: Into Mischief–Speed Dating, by Not for Love

A son of leading sire Into Mischief (who sires 15 percent winners from first-time starters), Fast and Flirty is the sixth starter produced by Speed Dating, a four-time stakes winner over distances from seven furlongs to 1 1/8 miles.

In short, Fast and Flirty brings a promising pedigree to the table. Her work tab isn’t overly flashy, though trainer Brendan Walsh has gone 6-for-32 (19 prcent) with horses debuting on dirt or synthetic this year, suggesting Fast and Flirty is eligible to outrun expectations on Friday.

It’s safe to say Hatch is a Whitham Thoroughbreds homebred through and through. Whitham Thoroughbreds (previously operating under the name of Janis Whitham) bred and raced 2012 Breeders’ Cup Classic winner Fort Larned, as well as Mrs. Revere (G2) winner Linda. Both of these runners were trained by Ian Wilkes, who also conditions the racehorse produced by their mating: Hatch.

Because Wilkes wins at just a 6 percent rate with first-time starters, Hatch probably won’t be cranked to win on debut. But the gray colt has nevertheless turned in encouraging workouts (including a half mile from the Churchill Downs starting gate in 48 seconds) and might be one to watch in the long term.

A son of two-time leading sire Kitten’s Joy (renowned for passing on grass ability to his progeny), Moms Moon was produced by Sweet Assay, who already has achieved noteworthy success as a broodmare. Her best runner to date is three-time Grade 3 winner Analyze It, an accomplished turf horse who ran third in the 2018 Breeders’ Cup Mile.

With this high-class pedigree in his corner, Moms Moon has the potential to develop into a top-class grass runner. Moms Moon might not fire his best shot on debut (Arnold wins at only a 5 percent rate with first-time starters), but look for this bay colt to show improvement down the road.

» Horse: All Choked Up
» Horse: Fast And Flirty