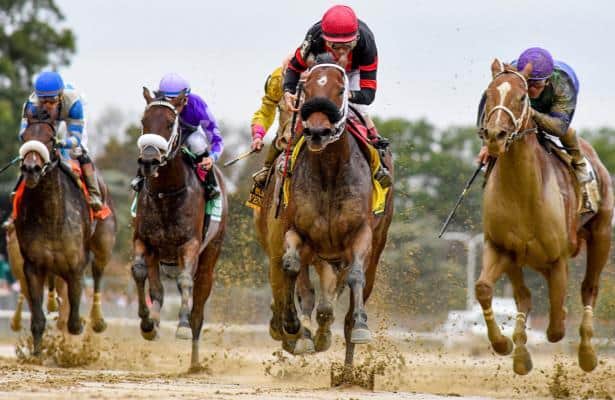 Juvenile racing at Belmont Park and Churchill Downs continues on Saturday with several high-quality maiden special weights on the agenda, including a couple of six-furlong sprints at Churchill stacked with potential 2022 Kentucky Derby contenders.

Let’s review half a dozen of the best-bred youngsters in this week’s edition of Prospect Watch:

If the pedigree “by Curlin out of Marion Ravenwood” sounds familiar, that is because Nest is a full sister to the long-winded Santa Anita Handicap (G1) winner Idol. Only time will tell if Nest can reach the same heights as her accomplished brother, but the bay filly has been training sharply at Belmont Park and will be ridden on Saturday by jockey Irad Ortiz Jr., a 28 percent winner when teaming up with Pletcher over the last two months. Do not be surprised if Nest debuts with a winning effort – certainly the distance should be to her liking.

No. 3 Coffee With Alex

As a son of four-time Grade 1-winning router Quality Road out of a mare by successful sire and stamina influence Medaglia d’Oro, Coffee With Alex is bred top and bottom to handle classic distances. We probably will not see the Brendan Walsh trainee produce a peak effort on debut, though Coffee With Alex did breeze a quick half mile from the Ellis Park starting gate in 47.4 seconds last week, suggesting he has at least a little speed. But regardless of how Coffee With Alex performs on Saturday, he might have long-term potential.

Let’s see. Gun Runner was voted 2017 Horse of the Year and is off to a sensational start at stud, siring 32 percent debut winners and two Grade 1 winners from his first crop. Awesome Flower wasn’t quite as accomplished on track, but she did win half a dozen stakes running one mile or farther on dirt and synthetic. It is no wonder why Cyberknife sold for $400,000 as a yearling, and after putting together a solid string of recent workouts at Saratoga and Churchill Downs, the chestnut colt looks ready to fire an encouraging shot for Eclipse Award-winning trainer Brad Cox.

A son of 2016 Breeders’ Cup Classic hero Arrogate, Leddy was produced by the accomplished broodmare Bootery, who already has enjoyed acclaim as the dam of three-time graded-stakes winner Neck ‘n Neck. The latter was an accomplished route runner who counted the Indiana Derby (G2) as his signature victory, so Leddy might follow suit with success running one mile or farther. He is bred top and bottom to excel over classic distances and improve with maturity.

Somalia wasn’t exactly a standout race mare – she lost her first 15 starts before ending her career with a win at the maiden claiming level. But the daughter of Mineshaft has been a resounding success as a broodmare, with her first four starters including the Grade 3-winning route runners Lookin for Eight and Miss Mo Mentum. The latter two both scored their biggest victories over synthetic surfaces, so if dirt racing doesn’t work out for I’m a War Lord, he will have potential for improvement when switching surfaces. But in the meantime, he has been breezing steadily in Kentucky and is worth watching on debut.

Last Saturday at Churchill Downs, Rodolphe Brisset and owners WinStar Farm and Siena Farm won a maiden special weight with the promising 2-year-old Great Escape. Perhaps they can pick up another win courtesy of the well-bred Federal Hill. A son of accomplished young sire Constitution (already responsible for 2020 Belmont Stakes winner Tiz the Law), Federal Hill has shown meaningful speed in the mornings at Keeneland, breezing five furlongs in 1:00.6 before clocking a half mile from the starting gate in :47.6. I am excited to see how Federal Hill performs on debut, while keeping in mind that Brisset trainees tend to improve off their career bows.