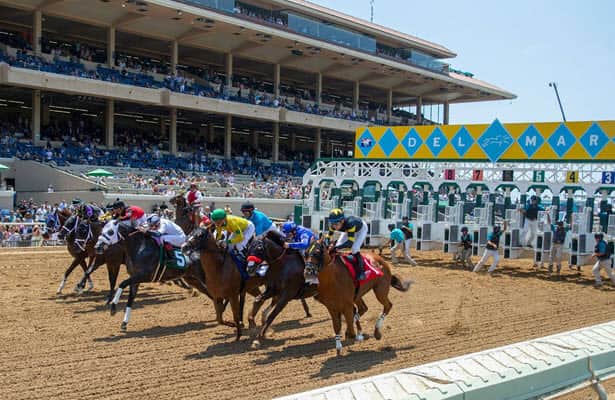 Todd Pletcher. Bob Baffert. Chad Brown. Shug McGaughey. Bill Mott. Phil D’Amato. These six men rank among the most accomplished trainers of Thoroughbred racehorses currently operating in the U.S., and all six have exciting 2-year-olds slated to debut this week.

From coast to coast, from Del Mar to Aqueduct and Gulfstream Park, we’re covering all the new names you need to know in this week’s edition of Prospect Watch:

Purchased for $600,000 as a yearling, Sweet Trouble is a daughter of three-time leading North American sire Into Mischief out of a mare by Candy Ride. This is a pedigree combining speed and early maturity with the ability to race at least 1 1/8 miles, stamping Sweet Trouble as a possible Kentucky Oaks (G1) type.

Sweet Trouble has been cranking out fast workouts for hot trainer Phil D’Amato (a 38 percent winner at Del Mar this meet), following up six furlongs from the starting gate in 1:12.6 seconds with a bullet five furlongs in 59 seconds. Throw in high-percentage jockey Flavien Prat and Sweet Trouble looks ready to win on debut.

The priciest filly in this promising field is the $725,000 2-year-old-in-training purchase Wudi, a daughter of champion 2-year-old male and acclaimed sire Uncle Mo out of a mare by three-time leading North American sire Giant’s Causeway. This is a pedigree geared toward stamina, but Wudi has shown speed in the mornings, most recently clocking a quick five furlongs from the Santa Anita starting gate in 1:00.4.

Wudi was entered to race at Del Mar on Nov. 12 but wound up as a vet scratch. She’s posted a couple of workouts since then and picks up ultra-hot jockey Juan Hernandez for her second time in the entries, suggesting Wudi is sitting on strong run.

No. 2 Power in Numbers

Haskell (G1) winner Girvin is off to a hot start at stud, counting Saratoga Special (G2) winner Damon’s Mound as the best of his four stakes winners. According to Brisnet stats, 22 percent of Girvin’s starters have won on debut, suggesting Power in Numbers is one to watch at Aqueduct.

Power in Numbers has shown speed in the mornings, most notably blazing a bullet half-mile from the Saratoga training track starting gate in 47.85 seconds. Trainer Chad Brown is winning at a 22 percent rate with first-time starters this year, and three-time Eclipse Award-winning jockey Irad Ortiz Jr. has the mount, so there’s a lot to like about Power in Numbers.

If the pedigree line “by Candy Ride out of Steady Course” sounds familiar, that’s because it’s the same mating that produced Mastery, undefeated winner of the Los Alamitos Futurity (G1), San Felipe (G2) and Bob Hope (G3) during an injury-shortened career.

Only time will tell whether Bearings can achieve the same level of success as his full brother, but the chestnut colt has put together a lengthy work tab for Hall of Fame trainer Bill Mott and warrants watching on pedigree alone.

Which racing surface will prove best for Battlefield Park? That’s a tough question. War Front is a versatile stallion whose runners have thrived on both dirt and turf. There’s no better example than War Front’s classic-winning son of War of Will, whose Preakness triumph on dirt preceded a victory in the Maker’s Mark Mile (G1) on turf.

Battlefield Park is eligible to show promise while debuting on dirt; he’s turned in several quick workouts over the surface, including a couple of half-miles in less than 48 seconds. But it seems equally likely Battlefield Park will develop into a turf horse for Hall of Fame trainer Shug McGaughey.

Is Rule It a Triple Crown contender in the making? Sire Good Magic finished second in the Kentucky Derby and already has sired Road to the Kentucky Derby prep race winners Blazing Sevens and Curly Jack, and dam sire Bernardini won the Preakness and sired Belmont runner-up Stay Thirsty. There’s clearly a lot of classic potential in Rule It’s pedigree.

A Repole Stable homebred, Rule It has been training at Palm Beach Downs under the tutelage of Todd Pletcher, most recently clocking five furlongs in 1:01.86. Most folks figure to focus their attention on Aqueduct and Del Mar this weekend, but overlooking Rule It’s debut at Gulfstream could be a mistake. He looks like a promising colt.