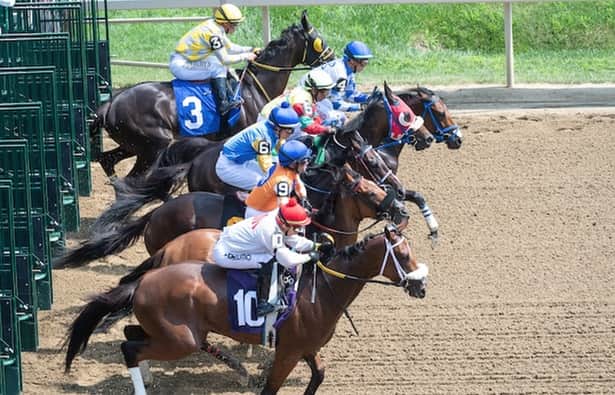 Week two of racing at the Del Mar and Saratoga summer meets is packed with exciting maiden special weights for juveniles. A 5 1/2-furlong sprint at Del Mar is shaping up to be particularly noteworthy, with Hall of Fame trainer Bob Baffert slated to debut a half-sibling to a Breeders’ Cup winner.

Let’s dig into the entries and review half a dozen of the most exciting new names to know:

If any filly is bred to relish the conditions of this two-turn turf route, it’s surely Hail To. A daughter of grass champion and perennial leading turf sire Kitten’s Joy, Hail To was produced by the unraced Dynaformer mare Dynaire. This makes Hail To a full sister to Sadler’s Joy, the ultra-durable winner of the 2017 Sword Dancer (G1) at Saratoga.

Hail To probably isn’t cranked to win on debut, considering that trainer Tom Albertrani wins at only an 8 percent rate with first-time starters. But then again, Albertrani saddled Hail To’s half-brother Wolfie’s Dynaghost to win his first start as a juvenile at Aqueduct last year, so perhaps Hail To will outrun expectations on Thursday. Her work tab is certainly solid, with 10 timed moves since May 12.

Faith Runner’s breeding paints an interesting picture. The top half of the Dallas Stewart trainee’s pedigree is all about stamina and late maturity; sire Medaglia d’Oro was a Grade 1 star over classic distances and has tended to sire similar types at stud. And the bottom half would appear to lean in a similar direction; dam sire Empire Maker won the Belmont Stakes and is best known as the grandsire of Triple Crown winner American Pharoah.

But Faith Runner’s dam, Miss Empire, did her best running as a juvenile, breaking her maiden in the Cinderella Stakes before going on to win the Pike Place Dancer Stakes and place in the Chandelier (G1). Effective over distances from 5 1/2 furlongs to 1 1/16 miles and over dirt, turf and synthetic, Miss Empire brings a dose of versatility to Faith Runner’s largely stamina-laden pedigree. It will be interesting to see which conditions prove most suitable for Faith Runner.

To say there’s quality in Watasha’s pedigree is putting it mildly. Sold for $450,000 as a yearling, the bay colt is a son of two-time leading sire Into Mischief (who sires 16 percent debut winners) out of the Elusive Quality mare Alwaan. The latter, though unraced, has proven quite productive as a broodmare. To date, she has foaled six winners from six starters, including 2014 Calder Derby winner Our Caravan.

Trained by Chad Brown, Watasha has been breezing steadily at Saratoga, even clocking a bullet half mile from the starting gate in 48 seconds flat on June 30. Three-time champion jockey Irad Ortiz is named to ride, stamping Watasha as a logical threat to win on debut.

There’s plenty to like about the pedigree of Irish Sea. A son of champion and promising young sire Honor Code, Irish Sea is the second starter produced by the First Defence mare Irish Jasper. The latter was a stakes-winning juvenile sprinter who later matured to win the Miss Preakness Stakes (G3), Victory Ride (G3), and Thoroughbred Club of America (G2) at ages 3 and 4.

Irish Sea cranked out eight timed workouts at Fair Hill in Maryland before shipping to New York, where he has breezed a pair of half miles from the starting gates at Belmont Park and Saratoga in recent weeks. Hall of Fame trainer Shug McGaughey strikes at only a 10 percent rate with first-time starters, so Irish Sea might need to get a race under his belt before finding winning form. But the dark bay colt is definitely one to watch in the long term.

Fluid Situation might not have the flashiest pedigree at first glance, but there is a lot to like about his breeding. Sire Warrior’s Reward won the Carter Handicap (G1) sprinting seven furlongs and has sired a bevy of stakes winners, while dam Volatile Vickie has found fame as the producer of Indiana Derby (G3) and Smarty Jones (G3) winner Axelrod.

The best-bred prospect in action this week is surely Mirasol. Hailing from the first crop of 2016 champion 3-year-old Arrogate, Mirasol is the seventh starter produced by the graded stakes-winning Dixie Union mare Justwhistledixie. The latter’s produce record is extraordinary, with her foals to date including:

• Mohayman, a four-time Grade 2 winner over distances from one mile to 1 1/8 miles.

Mirasol has been working up a storm for trainer Bob Baffert, who wins at a 38 percent rate with runners debuting in maiden special weights. The dark bay filly capped off her preparations with six furlongs from the Del Mar starting gate in 1:12 4/5 and figures to fire a strong shot under Hall of Fame jockey Mike Smith.