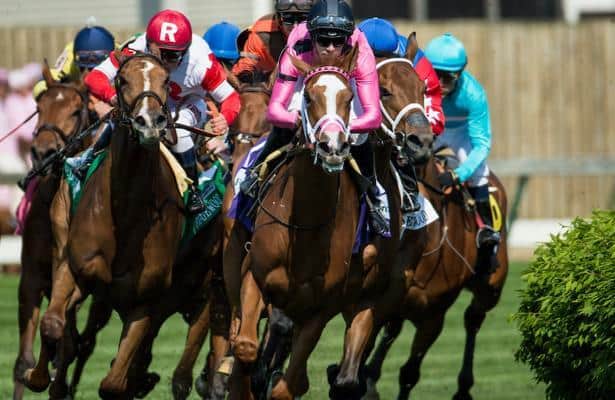 Looking to pass some time while waiting for Saturday’s Preakness at Pimlico? Then check out the Friday cards at Churchill Downs and Gulfstream Park, where a bevy of intriguing maiden special weights are taking place.

Let’s review half a dozen of the most promising 2-year-olds and 3-year-olds entered to debut:

From a pedigree perspective, Cowichan is bred top and bottom to thrive as a turf sprinter. Sire Kodiac was a capable grass dasher who placed at the Group 3 level, and his best progeny (including Wesley Ward’s two-time Group 1 winner Campanelle) have largely thrived over sprint distances. Dam Shehila never raced, but she previously foaled the Group 3-placed turf sprinters Ventura Diamond (a two-time stakes winner) and Alba Power.

Throw in the fact that Ward wins at a lofty 30 percent rate with first-time starters, and Cowichan is a logical choice to win her debut dashing 5 1/2 furlongs over the Churchill Downs grass. She’s facing only half a dozen rivals and looms as a possible standout with a bright future.

Clearly, Boppy O has the breeding to win from an early age. Sire Bolt d’Oro won the Del Mar Futurity (G1) and FrontRunner (G1) at age 2, while dam Pappascat is a daughter of Scat Daddy, who matured early enough to win the Champagne (G1) as a juvenile. Furthermore, Pappascat previously foaled Pappacap, runner-up in the 2021 Breeders’ Cup Juvenile.

Boppy O has produced a solid work tab in preparation for his debut, culminating with half a mile in 48.8 seconds at Palm Meadows. All signs suggest Bobby O can challenge for victory in his first run under colors.

This is a pedigree geared strongly toward stamina, so don’t expect Active Duty to produce a peak performance in his debut sprinting 6 1/2 furlongs. But when stretching out in distance down the road, this Dallas Stewart trainee has the potential to develop in a highly positive direction.

It’s safe to say Bluegrass Royale has the pedigree to develop into a Grade 1 winner. Sire Uncle Mo was a champion juvenile who counts Kentucky Derby hero Nyquist among his best runners to date, while Champagne Royale is the dam of Arkansas Derby (G1) winner Danza (who finished third in the Kentucky Derby) and also Majestic Harbor, winner of the Gold Cup (G1) at Santa Anita and three other graded stakes during a long and productive career.

As with Active Duty, Bluegrass Royale is bred to thrive running long, though Uncle Mo – a brilliant miler – also could introduce a bit of speed to the mix. Uncle Mo sires a solid 14 percent winners from first-time starters, and Bluegrass Royale has turned in a long series of sharp workouts, so don’t dismiss this well-bred colt from win contention.

One of the most expensive horses debuting this week is Sea Force, who sold for $635,000 as a yearling. The price is deserved from a pedigree standpoint – Sea Force is a son of Uncle Mo’s above-mentioned Kentucky Derby winner Nyquist out of Invitation, previously the dam of John Battaglia Memorial winner Magicalmeister.

Sea Force has shown promise in the mornings for Hall of Fame trainer Steve Asmussen, most notably clocking five furlongs from the Churchill Downs starting gate in a bullet 1:00.8. Nyquist sires 15 percent winners from first-time starters, which matches Asmussen’s success rate with debut runners, so Sea Force is eligible to fire a strong shot on Friday.

A son of champion and Breeders’ Cup Classic winner Arrogate (already the sire of Kentucky Oaks winner Secret Oath), Predominate is slated to become the seventh starter for Sweet Awakening, whose previous foals include two-time turf stakes winner Core Values plus Are You Kidding Me, a nine-time graded stakes winner on turf and synthetic.

Predominate is bred to improve with maturity and thrive running long, so sprinting 6 1/2 furlongs on debut is unlikely to be his strong suit. The fact that trainer Wayne Catalano wins with only 3 percent of his first-time starters is another sign Predominate will benefit from getting a race under his belt. But down the road, watch out – Predominate has shown flashes of talent in the mornings and could be a good one in the long run.