Prospect Watch: 5 juveniles to follow as summer winds down 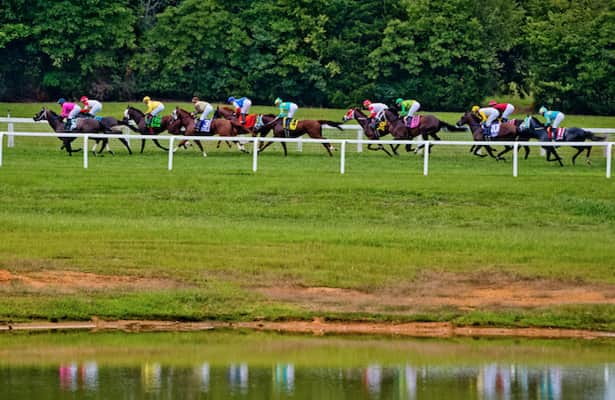 The summer meets at Del Mar and Saratoga are over, but high-class juvenile racing continues with competitive events at Kentucky Downs and Los Alamitos this weekend.

Here are five of the most intriguing first-time starters entered in a trio of maiden special weights:

A homebred racing for Don Alberto Stable, Garmento has the pedigree to be a long-distance specialist. His sire, Empire Maker, won the Belmont Stakes and is renowned as the grandsire of 2015 Triple Crown winner American Pharoah. Meanwhile, Garmento’s dam, Guapaza, was good enough to win the Waya (G3) racing 1 1/2 miles over the Saratoga turf course.

Debuting over one mile at Kentucky Downs should be right up Garmento’s alley, and ultra-hot jockey Joel Rosario (11-for-27 at Kentucky Downs this meet) is named to ride. There’s a lot to like about this dark bay colt, who has compiled a respectable work tab at Keeneland and Turfway Park

Hailing from the first crop of foals sired by 2015 Travers (G1) winner Keen Ice, Long Crow was produced by Dr. Zic, who already has achieved success as both a racehorse and a broodmare. On the track, Dr. Zic was a speedy sprinter talented enough to win the 2010 Madison (G1). As a broodmare, she is best known as the dam of Molto Bella, a Road to the Kentucky Oaks veteran who won the 2019 Gasparilla dashing seven furlongs.

This is a pedigree combining speed with stamina, so Long Crow has the potential to handle a wide variety of distances. Long Crow is listed at 20-1 on the morning line after compiling a seemingly unremarkable work tab at Louisiana Downs, but don’t be surprised if this Calumet Farm homebred outruns his odds.

Fresh off a hot conclusion to the Del Mar meet, Bob Baffert will unveil the $330,000 yearling acquisition Marco Polo at Los Alamitos. A son of Belmont Stakes winner Empire Maker out of a mare by Florida Derby (G1) and Blue Grass (G2) winner Harlan’s Holiday, Marco Polo is bred to handle classic distances and could develop into a Triple Crown contender if he shows talent on Saturday.

Certainly it will come as no surprise if Marco Polo visits the winner’s circle. He’s been training fast at Del Mar, most notably clocking five furlongs from the starting gate in 49.4 seconds on Aug. 16. A solid debut should be in the offing, with the potential for improvement down the road.

No doubt, one of the best-bred juveniles set to debut this week is Carioquinha. A daughter of ultra-hot young sire Gun Runner (responsible for two Grade 1 winners on closing weekend at Saratoga), Carioquinha was produced by the Pure Prize mare Pure Clan. The latter won multiple graded stakes on dirt and placed third in the 2008 Kentucky Oaks before transitioning to turf, over which she won the American Oaks (G1) and Flower Bowl (G1).

Pure Clan already has foaled a stakes winner, with her daughter Princesa Carolina claiming the 2019 Dueling Grounds Oaks at Kentucky Downs. If Carioquinha shares the same affinity for the unique European-style turf course at Kentucky Downs, he can surely vie for victory on debut.

It’s thoroughly possible Mission Belle will prove better on dirt than turf, considering Noble Mission is best known as the sire of Travers (G1) and Jockey Club Gold Cup (G1) hero Code of Honor. But at least Sunday’s one-mile distance should be ideal for Mission Belle.