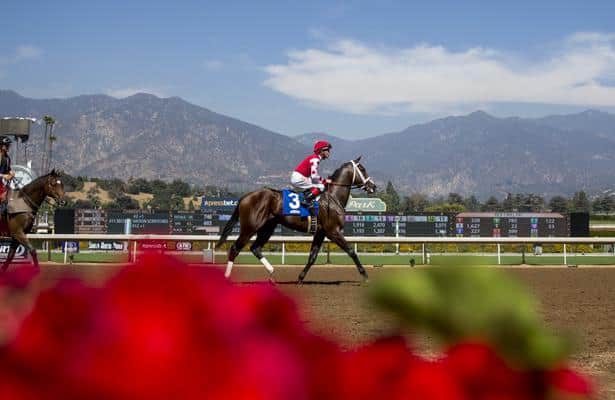 May is always an interesting time of year to search for up-and-coming racehorses. Generally speaking, it is too early for the best juveniles to take center stage and too late for elite 3-year-olds to be debuting.

But no racing week is complete without a handful of promising prospects to follow. A pair of early-season juveniles and a couple of expensive 4-year-olds have caught my attention this week, so let’s dig in and review their credentials:

Loveherheart hails from the first crop of foals sired by Klimt, an early-maturing son of Quality Road who won the Del Mar Futurity (G1) and Best Pal (G2) as a juvenile. Loveherheart’s dam sire, Yonaguska, was likewise a progressive 2-year-old, securing his signature victory in the Hopeful (G1). Will this win-early breeding translate into success for Loveherheart? It’s certainly possible.

After all, Loveherheart has shown speed in the mornings for hot trainer Andrew Lerner, most notably clocking four furlongs in :47 4/5 on April 23. Lerner has been winning at a 20 percent rate this meet, and accomplished jockey Abel Cedillo takes the mount, setting the stage for a promising debut from Loveherheart.

At the Spa certainly has put in the mileage to be ready for a sharp debut. A daughter of Wood Memorial (G1) winner Outwork, At the Spa has been breezing steadily since February, cranking out nine timed workouts. She’s been particularly sharp in the last couple of weeks, breezing half miles from the Santa Anita starting gate in :47 2/5 and :48 2/5.

At the Spa’s dam, Spa Creek, was an accomplished and durable mare who won four low-level stakes between six furlongs and 1 1/8 miles on the West Virginia circuit. Spa Creek, in turn, is a daughter of 1997 champion sprinter Smoke Glacken, who won the Hopeful (G1), Sapling (G2), and Tyro Stakes as a juvenile. In short, there’s speed in At the Spa’s pedigree, suggesting the Jorge Periban trainee can be a factor in her first run under colors.

There’s a reason that Colombe D’ Oro sold for $510,000 as a yearling – she’s bred top and bottom to be a classy racehorse. A daughter of renowned sire and stamina influence Medaglia d’Oro, Colombe D’ Oro was produced by the Square Eddie mare More Complexity, winner of the Betty Grable Stakes sprinting seven furlongs at Del Mar.

Under the care of trainer Shug McGaughey, Colombe D’ Oro has posted 16 timed workouts in preparation for her debut, cranking out one per week like clockwork since the middle of January. The fact that Colombe D’ Oro is debuting as a 4-year-old hints she might have had problems in the past. But judging from her steady work tab (which includes a quick half mile in :47 4/5 on April 18 at Belmont), she is past them now. Hot jockey Jose Ortiz takes the mount, and I’m intrigued to see what Colombe D’ Oro can accomplish.

Four-time champion trainer Chad Brown is set up to unveil Infinite Potential, an Irish-bred daughter of Invincible Spirit out of the Smart Strike mare Darysina. This is a pedigree geared toward success on grass, so it’s not a surprise to see Infinite Potential debuting over the Belmont lawn.

Infinite Potential already has taken a couple of spins over the turf course at Palm Meadows, and since Brown wins at a solid 20 percent rate with first-time starters, there’s no reason to think this $412,430 yearling purchase can’t factor right out of the gate. Like Colombe D’ Oro, Infinite Potential is debuting as a 4-year-old, but a steady work tab since mid-February indicates she’s right on track. For all we know, her potential might indeed be infinite – we’ll find out more on Saturday.