Promise Keeper wins the Peter Pan; Belmont Stakes could be next 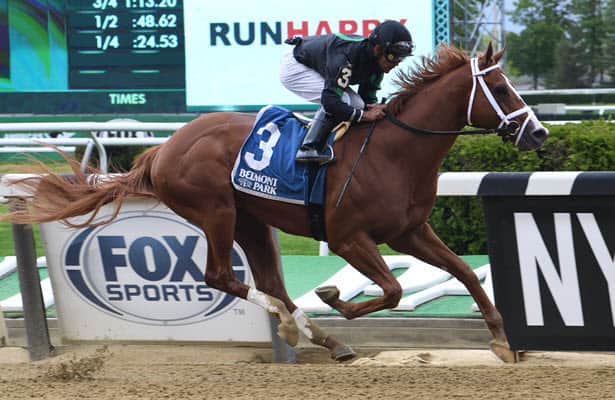 Promise Keeper, who was sent off as the 3-2 favorite in a field of five, sat an ideal stalking trip and then swept to the lead to win the $200,000 Grade 3 Peter Pan at Belmont Park. The newly-elected Hall of Fame trainer Todd Pletcher got his fourth victory in this nine-furlong stake that serves as a prep race for the Belmont Stakes on June 5.

Jockey Luis Saez allowed the son of Constitution to get into a comfortable position just outside of the pacesetter Wolfie’s Dynaghost. The fractions of 24.53, 48.64, and 1:13.20 for six furlongs were moderate, but Promise Keeper had no trouble taking the lead at the top of the stretch. He then was able to turn back a challenge from the stakes winner and eventual second-place finisher Nova Rags.

“He’s a big mover and Luis [jockey Saez] was able to do a perfect job putting him in a good stalking position and let him take advantage of that rhythmic stride that he has," explained Pletcher. "He just kept going and going and going. Luis said he felt like he had a lot of horse in the end. So, it’s encouraging.”

Promise Keeper, who is owned by Woodford Thoroughbreds and WinStar Farms, crossed the finish line more than two lengths in front in a final time of 1:50.71.

In 2014, Tonalist won the Peter Pan and went on to victory in the Belmont Stakes.

"Historically, the Peter Pan has been a good prep for the Belmont," added Pletcher. "I'll talk to the connections about it, but that was amongst the discussions leading into this."

Pletcher is also considering other for the Belmont Stakes, including Kentucky Oaks winner Malathaat.

"Known Agenda and Bourbonic are definitely pointed that way," Pletcher said. "Sainthood we're going to give a breeze on the turf and make a decision after we see that. Dynamic One is another [under consideration]. Malathaat, it's on the radar, but we're not committed to anything just yet."