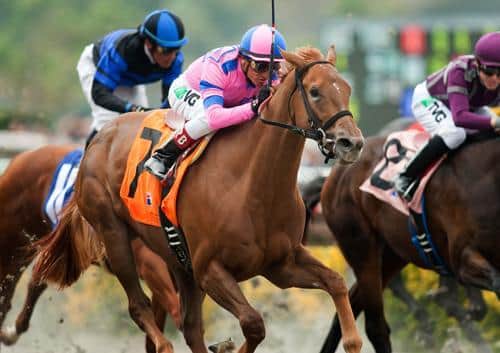 Weemissfrankie, the star 2-year-old filly, was back in her stall in Barn 52 North here Wednesday following successful surgery Sunday for a condylar fracture of her right foreleg.

“The surgery went excellent,” said trainer Peter Eurton of the operation performed by Dr. Wayne McIlwraith at Los Alamitos. “I just got the e-mail from Dr. McIlwraith. The prognosis is very good.”

The injury was discovered after Weemissfrankie finished fourth as the 9-to-10 favorite in the Hollywood Starlet. “One screw was put in,” said Eurton of the surgery. “The fracture was non-displaced.”

Eurton said the filly might be able to return to training in four months. “We can start hand-walking her in 14 days,” said Eurton. “She will stay here for 45 days. She might start aqua-tread work in three months.

“In four months, we could start jogging her,” said Eurton in hopes of a return to the races at Del Mar or the autumn Santa Anita meet.

Weemissfrankie established herself as the top 2-year-old filly on the West Coast after victories in the Del Mar Debutante and Oak Leaf Stakes, both Grade I’s, and a third-place finish in the Breeders’ Cup Juvenile Fillies.