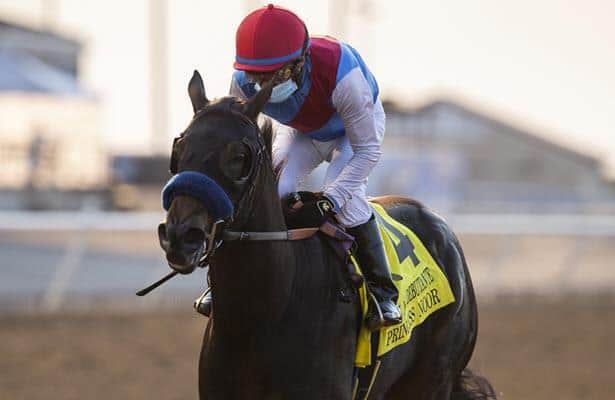 Princess Noor was geared down late by Victor Espinoza after she had left the field in her wake through the stretch, but there were anxious moments for the connections after a stewards' inquiry was launched due to an incident at the gate. Princess Noor had broke inwardly at the start and collided with Sorrento Stakes (G2) winner My Girl Red, who was subsequently not persevered with by Flavien Pat. However, after a brief review, stewards' ruled there would be no change and declared Princess Noor the official winner.

My Girl Red appeared to take an awkward step after the incident and was pulled up by Prat in short order. On social media shortly after the race, owner and breeder Eric Brehm Jr. indicated all was well with the Texas Red filly, who is trained by Keith Desormeaux.

"MGR jumped tractor tracks and Flavien pulled her up just to be safe," Brehm Jr. posted. "She's back at the barn cooling down and completely sound."

Espinoza chalked the incident up to Princess Noor's inexperience.

"She’s a little green, only her second time (to race)," Espinoza said. "Coming away from there she went in a bit and I tried to get her off as quickly as I could. You try to control the babies as best as you can, especially at the break. The other filly (My Girl Red) came out on me. My filly was OK from there."

In the seven-furlong Debutante, Princess Noor raced wide and in the clear just off a pace of :23.01 and :45.49 for the opening half mile set by Forest Caraway. Princess Noor moved up to engage the leader at the three-eighths pole and the two front runners proceeded to usher the field into the top of the stretch. It was at that point that Princess Noor found her best stride, as the filly by freshman sire Not This Time quickly opened her lead through six furlongs in 1:10.03 before letting off the gas and winning by 6 1/2 lengths.

Princess Noor, who paid $3.40 as the odds-on favorite for trainer Bob Baffert, completed the trip in 1:23.15. Forest Caraway was a distant second followed by Illumination and Get On The Bus.

Espinoza was matter-of-fact in his assessment of what could lie ahead for Princess Noor after two starts.

"I really don’t know how good she is, because I haven’t let her run yet," Espinoza noted.

Out of the Wilko mare Sheza Smoke Show, Princess Noor commanded a seven-figure purchase price at this year's OBS Spring Sale of 2-year-olds. She debuted on Aug. 22 at Del Mar and went gate-to-wire to win by 2 1/2 lengths.

“We knew going in she was a special filly," Baffert said. "She showed so much brilliance at the sale, that’s why she cost so much. We got what we expected to see today."