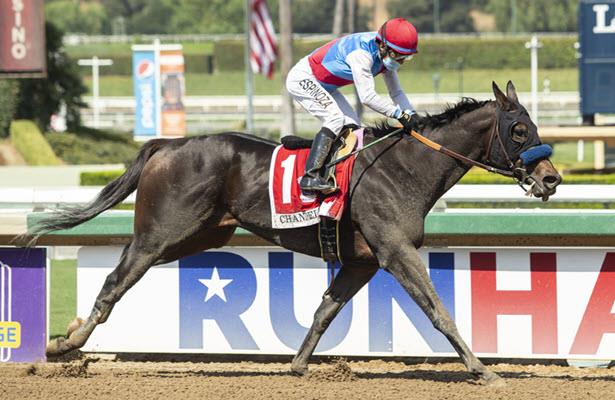 Bob Baffert had three chances to win Saturday’s $200,000 Chandelier (G2) for 2-year-old fillies, a win-and-you’re-in race for the Breeders’ Cup Juvenile Fillies. In the end, it was the 1-5 favorite Princess Noor who took the win by 8 1/4 lengths at Santa Anita.

Before the 1 1/16-mile race jockey Victor Espinoza had compared the filly to Triple Crown winner American Pharoah. When asked on the TVG race broadcast why he associated the two, Espinoza heaped praise on Princess Noor.

“The talent,” Espinoza said. “The energy, the speed that she has. She dominates everyone with that energy she creates during the race.”

Princess Noor, breaking from post 1, started toward the back of the five-horse field, but Espinoza took her outside Illumination going around the far turn and never looked back, cruising to a victory with Varda crossing the wire a distant second.

“You can only do that when you have a Ferrari under you,” Baffert said after the race.

Princess Noor is a daughter of Not This Time out of Sheza Smoke Show, by Wilko. She is owned by Zedan Racing Stables.

With the Chandelier victory, Baffert’s 12th in the race, Princess Noor moved her record to 3-for-3. She will train for the Breeders’ Cup Juvenile Fillies, scheduled for Nov. 6 at Keeneland.

“I think it’s perfect for her,” Baffert said.