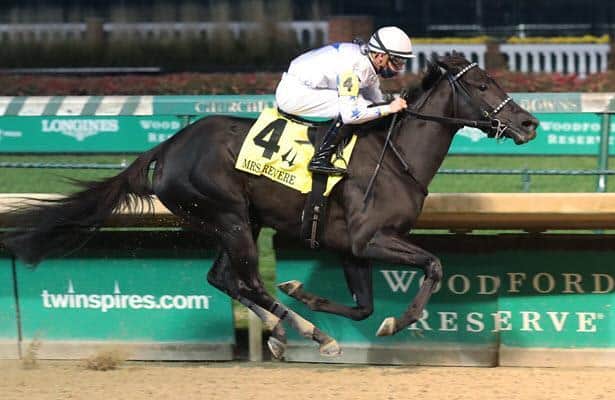 Princess Grace put away pacesetter Positive Danger around the far turn and opened a clear lead in the stretch to comfortably win Saturday’s 30th running of the $200,000 Mrs. Revere Stakes (G3) at Churchill Downs by 2 3/4 lengths over a closing Pass the Plate.

Owned and bred by Susan and John Moore, Princess Grace ran 1 1/16 miles over a fast track in 1:44.00 to collect her first stakes win. Florent Geroux rode the winner for trainer Mike Stidham.

A traditional turf fixture, this year’s Mrs. Revere was transferred to the main track because Churchill Downs’ turf course has not satisfactorily responded to this fall’s climate. Because of the surface switch, the Grade 2 event was automatically downgraded to a Grade 3 by the American Graded Stakes Committee.

Positive Danger carved out early fractions of :24.54 and :49.68 with Princess Grace in close pursuit. Midway around the far turn, Princess Grace took command and clocked six furlongs in 1:13.84. She opened up a three-length lead in the stretch and was able to easily turn back a late rally from Pass the Plate.

“The pace unfolded exactly how I thought that the horse to my inside (Positive Danger) would go to the lead and we could sit just to her outside,” said Geroux, who also rode Lovely Bernadette to win the 2017 Mrs. Revere. “She broke very alertly and was tracking nicely throughout the race. She’s a nice filly and with winning on the dirt it gives the connections more options in the future but I would guess goes back to turf.”

Stunning Sky, the 3-2 favorite, was fourth and was followed by Witez and Positive Danger. Hendy Woods was the lone late scratch.

Princess Grace is a dark brown or bay daughter of Karakontie (Jpn) out of the Silent Name (Jpn) mare Masquerade who was bred in Kentucky.

“You’re always concerned about a horse that didn’t race on dirt yet,” Stidham said. “She had pretty consistent works over the Tapeta surface at Fair Hill. We didn’t necessarily have a great line how she would take to the dirt but her early works were on the dirt. We thought she handled it very well then so we were cautiously optimistic. We knew that her dam Masquerade was game on both dirt and turf so we felt good trying it.

"Down the backside you saw Florent was in a great spot just off the leader. When he let out a notch she just opened up impressively.”

The Mrs. Revere is named in honor of Mrs. Revere, an accomplished Churchill Downs fan favorite in the mid-1980s. Mrs. Revere won 12 races in 28 starts, finished second seven times and earned $429,545 for Hall of Fame trainer Bill Mott. Her six wins in a dozen starts at Churchill Downs included stakes triumphs in the Regret, Dogwood and Edgewood in 1984 and the Kentucky Cardinal in 1985. She was owned by Drs. David Richardson and Hiram Polk, who have provided the winner’s trophy for the Mrs. Revere in each year of its existence.