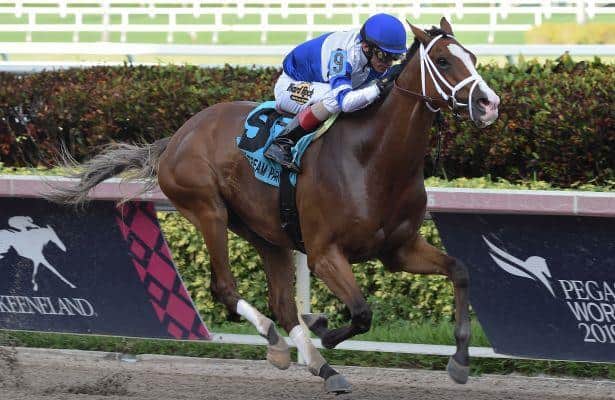 Prince Lucky topped a Todd Pletcher exacta in Saturday’s Grade 3, $100,000 Hal’s Hope Stakes at Gulfstream Park after dueling with stablemate Copper Town before pulling away in the stretch.

It was the first race back for Prince Lucky, who was last seen winning Belmont Park’s Easy Goer Stakes in June.

“It was a really big effort from both horses,” Pletcher said. “I thought they both ran well, but Prince Lucky, he’d been training very sharply and we decided rather than try an allowance race off the layoff, he’s training well enough to give this a try.”

The Hal’s Hope also marked the return of last year's Grade 2 Tampa Bay Derby winner Quip, who was away since an off-the-board Preakness Stakes finish.

Copper Town bobbled at the start before taking over the pace. Quip was to his inside on the rail while Prince Lucky sat in third three wide down the backstretch. The opening fractions went in 23.07, 45.00 and 1:09.21.

Quip could not keep up at the Pletcher duo turned for home. While they were close at the top of the stretch, Prince Lucky proved much the best under jockey John Velazquez. The pair was six lengths in front when they completed the mile in 1:34.84.

Quip fought to remain third over Tale of Silence, who rallied from last.

The Hal's Hope was the first graded stakes win for Prince Lucky, a Pennsylvania homebred for Daniel McConnell. The 4-year-old Corinthian gelding now has five wins from nine starts and earnings of $291,830.

“I would say with Prince Lucky we’d look at the (Grade 2, $300,000) Gulfstream Park Mile on Florida Derby day, if he bounces out of it well,” Pletcher said. “I don’t’ think he’s limited to that, I just think it’s a good distance to start him back at.”