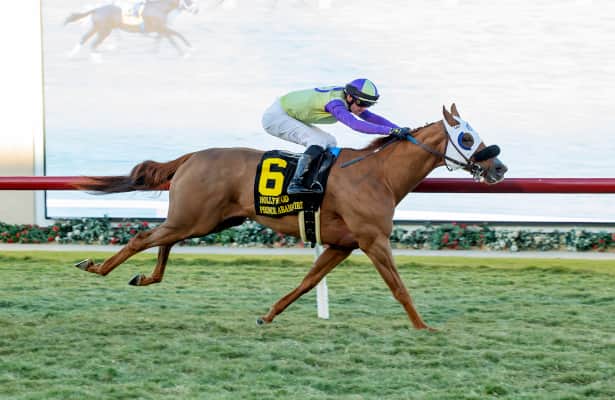 Prince Abama stalked the leader for the first portion of the 12-furlong Hollywood Turf Cup at Del Mar Friday, took over the lead at the mile marker, then simply outran his six rivals in the Grade 2 headliner to report home a three-quarter length winner.

He was ridden by Flavien Prat, who was tallying his fourth winner of the afternoon. The chestnut is trained by Phil D’Amato, who was capturing the marathon for the second year in a row. He took it last year with the 6-year-old Say the Word.

D'Amato said Prat's timing and Prince Abama's maturation added up to the victory.

“Flavien made the right move at the right time," he said. "He sensed that the pace was ultra slow when that three horse was on the lead. He decided at the 5/8’s pole, he wanted to be on the lead and that was the winning move. He (Prince Abama) has just matured and got better.”

Nobody could identify all six winners in the Pick Six Single Ticket Jackpot wager for the eighth day in a row. That means that the carryover will amount to $295,929 on Saturday. The nine-race card has a first post of 12:30 p.m. PST (3:30 p.m. EST).