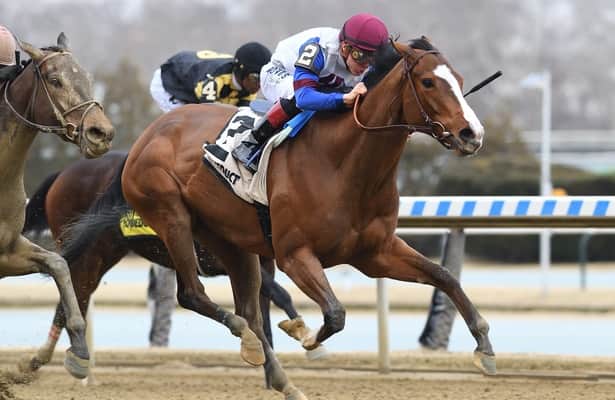 Bank Sting will return to sprinting for the first time since January in Sunday’s $100,000 Dancin Renee for older New York-bred mares traveling six furlongs over the main track at Belmont Park.

Trained by John Terranova, Bank Sting enters from a game runner-up finish to Make Mischief in the Critical Eye Handicap. The daughter of perennial leading New York sire, Central Banker stalked from farther off the pace than usual in fifth but still gave a good run at the end under Joel Rosario to pick up place honors, four lengths back of Make Mischief.

“She came out of that last race well,” Terranova said. “She likes to be in the fight a little bit, so I think maybe she was a little disengaged early on. That was a nice filly that got the jump and I don’t know if we had gone toe-to-toe with her if we’d have beat her anyways, but I think she’s more of a filly that likes to be closer. Joel got to know her last time and we’ll see. In sprints, there’s no holding back there.”

Terranova said he was not specifically looking to cut Bank Sting back in distance, but is content to do so as the Dancin Renee came up as the next logical spot for her before Saratoga.

“We took a shot here as it’s the only real option we have right now. She looks great and is ready to go,” said Terranova.

Time Limit has finished in-the-money in all but two of her 19 starts and has not finished outside of the top-three since a fourth-place finish in the Joseph A. Gimma in September 2019 over Big Sandy.

The daughter of Bustin Stones arrives from an even third-place finish in the six-furlong Skipat on May 21 at Pimlico Race Course where she tracked in third under Irad Ortiz, Jr. before briefly taking second at the stretch call. She faded back to third and finished 5 3/4 lengths behind the victorious Joy’s Rocket.

Time Limit, who owns a 2-for-3 record at Belmont, will be ridden again by Ortiz, Jr. from post six.

Stakes-winner The Important One will make her 5-year-old debut for Hall of Fame trainer Steve Asmussen after closing out her 2021 campaign with a distant third-place effort in the NYSSS Staten Island behind Bank Sting.

The Majestic City bay earned three victories in 2021, capped by an easy front-running score in the Iroquois sprinting 6 1/2 furlongs over a sloppy and sealed Big Sandy. The Important One has now found her best stride on dirt after only one win in seven turf tries. Her lone win over the grass was her maiden score at third asking in her first start for Asmussen. She boasts a perfect in-the-money record over the dirt, including her Iroquois score and another stakes placing in the 2020 NYSSS Park Avenue.

Jose Lezcano has the return call from post two.

Queen Arella streaks in from Finger Lakes off of five straight victories at the Farmington oval for trainer Anthony Ferraro. The 4-year-old Speightster filly was last seen drawing away to a 4 1/4-length allowance victory sprinting 4 1/2 furlongs on May 9 under Luis Perez. She has won her last five starts by a combined 16 1/2 lengths.

Queen Arella returns to stakes company for the first time since finishing eighth in the Grade 3 Forward Gal in January 2021. Perez will ride again from post 5.

Kept Waiting will get class relief after a runner-up finish in the Distaff (G3) on April 9 and a non-threatening fourth-place effort behind Bella Sofia last out in the Vagrancy (G3) on May 14.

Trained by Robert Falcone, Jr., Kept Waiting has hit the board in 11-of-13 lifetime starts and won the Broadway by 5 1/2 lengths for her lone stakes victory in February at Aqueduct. Kendrick Carmouche retains the mount from the inside post.