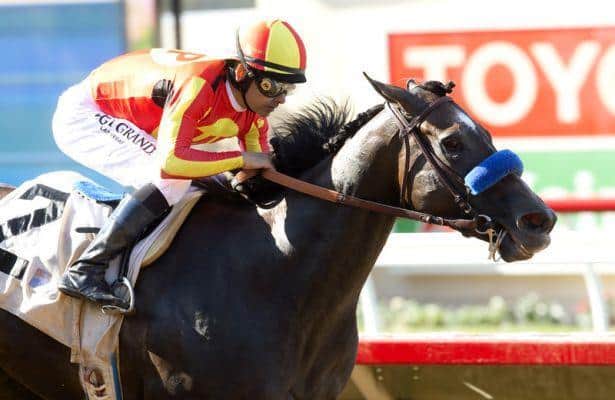 Talented Pretty N Cool, who began her career last summer at Del Mar where she won the Sorrento Stakes and then was runner-up to ultimate juvenile filly champion Songbird in the Del Mar Debutante, rallied powerfully in the stretch to win Wednesday’s featured $77,600 C.E.R.F. Stakes.

With Hall of Famer Mike Smith in the saddle, Pretty N Cool split horses entering the stretch to engage front-running 6-5 favored Shh She’s Ours, quickly disposed of that rival and cruised to the wire one and one-half lengths in front in 1:09.07 for the six furlongs.

Enchanting Lady, the winner’s stablemate from the barn of trainer Bob Baffert, closed stoutly to be runner-up, a half-length in front of the tiring Shh She’s Ours, with Dr. Fager’s Gal fourth in field of fillies and mares. Withdrawn was Everqueen.

Pretty N Cool, a daughter of Scat Daddy owned by Pegram, Watson and Weitman who was competing for the first time since last January 2, went postward as third choice and paid $8, $4.40 and $2.60. The victory was her fourth in eight starts and first money of $46,560 increased her earnings to $432,560.