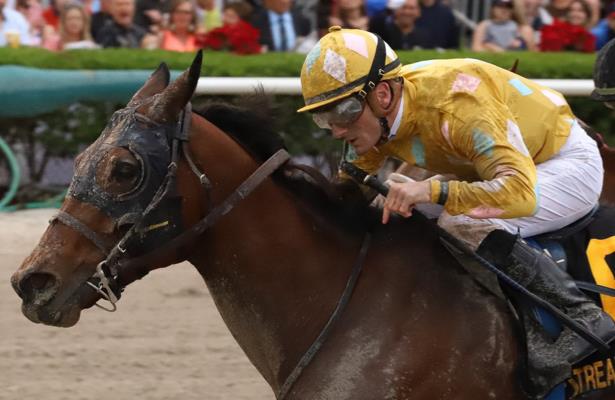 Multiple graded-stakes winner Diamond Oops will face six rivals in Sunday’s $60,000 Opening Lead at Gulfstream Park while prepping for a title defense in the Grade 3 Smile Sprint on Sept. 5.

The Patrick Biancone-trained 5-year-old earned graded-stakes credentials with an off-the-pace three-quarters of a length triumph in last year’s Smile, which the son of Lookin At Lucky used as a springboard for back-to-back Grade 1 second-place finishes in New York and Kentucky in his next two starts.

This year, Biancone has no plans to stray from South Florida in the foreseeable future.

“We decided to stay and run here and then the Smile,” said Biancone, who had entertained the idea of running Diamond Oops in the July 4 Met Mile (G1) at Belmont. “Last year, there was no COVID-19. Andie, my daughter, travels with the horses. I don’t want to take the risk that she gets sick or something.”

Biancone, whose daughter serves as his assistant at Palm Meadows, Gulfstream Park’s satellite training facility in Palm Beach County, is looking for Diamond Oops to improve off his second-place finish as the even-money favorite in the June 13 Coaltown Handicap, in which he conceded seven pounds to victorious Eye of a Jedi while making his first start in nearly five months.

“He had no excuse,” Biancone said. “The winner came on the outside and he didn’t see him. It was a good race.”

Last year, after winning the Smile, Diamond Oops went on to finish second behind Imperial Hint in the six-furlong Alfred G. Vanderbilt (G1) at Saratoga and a game second in the Shadwell Turf Mile (G1) at Keeneland. He subsequently finished a troubled eighth in the Breeders’ Cup Dirt Mile before concluding the 2019 season with a victory in the Mr. Prospector (G3) at Gulfstream for Diamond 100 Racing Club LLC, D P Racing LLC, Patrick Biancone Racing LLC and Amy Dunne.

Although a one-turn specialist, Diamond Oops ran in the 1 1/8-mile Pegasus World Cup (G1) on Jan. 25 at Gulfstream Park, acquitting himself nicely with a fourth-place finish in a field of 10.

Luca Panici, who rode Diamond Oops for the first time in the Coaltown Handicap, has the return mount in Sunday’s six-furlong overnight stakes for 3-year-olds and up.

Monarch Stables Inc.’s Art G is Back is scheduled to be back in action Sunday after a seven-month layoff. The 4-year-old son of Exchange Rate had a busy and successful 3-year-old campaign, in which he won a pair of stakes and placed in fourth other stakes.

“He looks fabulous. The rest did him good,” trainer Ron Spatz said. “Hopefully, he runs well.”

Art G is Back ran 13 times at distances between seven furlongs and 1 1/16 miles, winning four of six starts over the Gulfstream Park main track, including two stakes wins at seven furlongs.

“He’s never run six furlongs. I think it’s a little bit short. This is a spot to jump off,” said Spatz, who also saddled Art G is Back for three stakes placings on turf.

Miguel Vasquez, who was aboard for Art G is Back’s victory in the Thirsty Fish last year, will be reunited with the Florida-bred colt.

Jacks or Better Farm Inc.’s Garter and Tie will seek his first victory in six starts since capturing the Ocala Stakes by 10½ lengths prior to finishing fifth behind Diamond Oops in last year’s Smile. The 4-year-old homebred son of Brooks ‘n Down has captured three stakes over the Gulfstream track, including the $200,000 Florida Sire Stakes Affirmed in 2018.

Emisael Jaramillo has the call on the Ralph Nicks-trained half-brother to Shivaree, who finished second in the March 28 Florida Derby (G1).

Imaginary Stables and Glenn K. Ellis’ Royal Squeeze, who finished fourth in last year’s Smile, will seek his 11th career win over the Gulfstream track Sunday. The Elizabeth Dobles-trained 8-year-old gelding has won four stakes at Gulfstream and is coming off a May 31 optional claiming allowance victory.

Victor Lebron has the return call aboard the won of Wildcat Heir.

Mi Tres Por Ciento, a multiple-stakes winner in Chile who won his U.S. debut at Gulfstream three starts back, is scheduled to make his first start for owners Paradise Farms Corp. and David Staudacher and trainer Michael Maker after being claimed for $62,500 out of his most recent start.

Edgard Zayas has the call aboard in the 5-year-old gelding.

My Purple Haze Stables’ Cool Arrow and Linda Riznick’s Running for Riz round out the field.