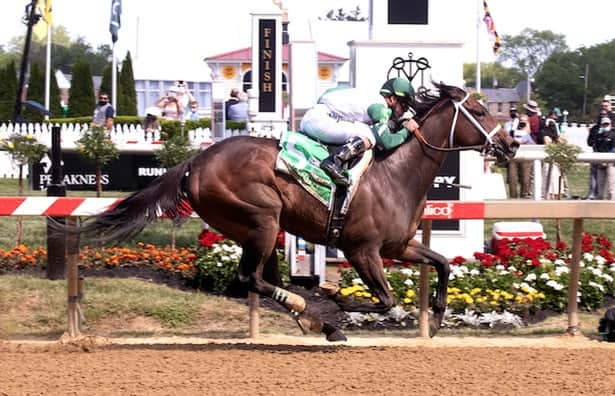 Even in a career that counts more than 2,000 winners and a dozen graded-stakes, trainer Guadalupe Preciado can count the truly special ones he’s had on one hand.

The first belongs to millionaire Favorite Tale, who captured the 2014 Gallant Bob (G3) and 2015 Smile Sprint (G2), and later that year ran third in the A.G. Vanderbilt Handicap (G1) and Breeders’ Cup Sprint. Favorite Tale was no stranger to Maryland, winning the Dave’s Friend at Laurel Park in 2018 in his penultimate career start.

The six-furlong Shine Again for fillies and mares 3 and up is among five stakes worth $450,000 at Pimlico Sunday and the only one on dirt. It is also the next installment in the Mid-Atlantic Thoroughbred Championship (MATCH) Series.

Based at Parx, where he was inducted into its Hall of Fame in 2013, Preciado is a native of Mexico who began training in 1989. He topped $1 million in season earnings for 24 consecutive years, from 1997 to 2017, exceeding $2 million four times. His brother, Ramon, also trains.

“The last nice horse I trained before her is Favorite Tale. He was a (Pennsylvania)-bred, too,” Preciado said. “She’s a nice one. It’s not easy to find those kinds of horses. It’s easy for guys like the Todd Pletchers and the Chad Browns and all the guys that have so many 2-year-olds every year. It’s no problem to find them. We have local horses over here. It’s hard.”

Preciado was working for trainer Ron Benshoff when the two attended a party where Benshoff introduced him to Jack Mondel of Hidden Lane Farms. A friendship developed that soon had Mondel sending Preciado the kind of horses to give his fledgling career a boost, including Debutante’s Halo, winner of the 1990 Demoiselle (G2), and Mr. Nasty, who won the 1990 Gravesend (G3) and 1991 Tom Fool (G2).

Other graded-stakes winners Preciado trained are Caught in the Rain, Iron Punch, Score a Birdie, Joker, Michael’s Star and Sham Francisco. Favorite Tale’s Smile Sprint at Gulfstream Park was his most recent.

Among his previous Maryland stakes wins are Michael’s Star in the 1996 Harrison E. Johnson Memorial, Mary’s Silver Pen in the 2000 Marshua and Rockin Jojo in the 2016 Geisha and Maryland Million Distaff.

Preciado initially entered Chub Wagon in the seven-furlong Bed o’ Roses (G3) June 4 at Belmont Park, where she was installed as the morning-line favorite, but opted to skip the race. She comes back to a distance where she already has won three times including her unveiling, which didn’t come until mid-November of her 3-year-old season at Parx and provided Preciado with his milestone 2,000th victory.

“When I got her, the owner told me that she’s a nice filly,” Preciado said. “Sometimes you have a little problem and when you have a horse that can run, you do the best you can to take care of the little problem before you got a big problem. Especially with the 2-year-olds. If you don’t wait, they make you wait.”

Chub Wagon reeled off three straight allowance wins before romping in the seven-furlong Unique Bella against state-breds April 27 at Parx. In her first open-company stakes, she captured the Skipat at Pimlico May 15 on the undercard of the 146th Preakness Stakes (G1).

The competition in the Shine Again is expected to include heavyweights such as Hello Beautiful, a five-time stakes winner that hasn’t raced since the Barbara Fritchie (G3) Feb. 20 at Laurel, and Dontletsweetfoolya, who strung together five straight wins, two in stakes, before losses in the Fritchie and Skipat, where she ran fourth in her comeback. Hibiscus Punch, the 41-1 upset Fritchie winner, also is nominated.

Affable and easy-going, Preciado is less worried about maintaining the streak as he is seeing Chub Wagon run well and enjoying the ride.

“At my age, I don’t care too much anymore because I know whatever will happen, will happen. For me it’s exciting.”