Preakness update: Who’s in, who’s out and who’s possible 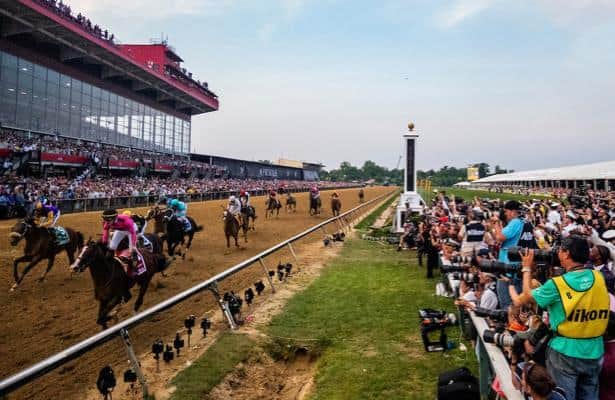 It appeared nine horses would be entered Monday for Saturday's 147th running of the Preakness Stakes with the addition of maiden winner Fenwick and the defection of long-shot, graded-stakes winner Un Ojo.

The addition of Fenwick came Monday in the final hours before the draw scheduled for 4:30 p.m. EDT. The Curlin colt was 11th in the Blue Grass (G1) after breaking his maiden in March at Tampa By Downs. (Read more here.)

A day after he was said to be a go for the Preakness, 70-1 Rebel Stakes winner Un Ojo was removed from consideration after he aggravated the foot bruise that kept him out of the Kentucky Derby.

On Saturday, another colt was added to the field when trainer Tim Yakteen confirmed Armagnac, a Santa Anita allowance winner last Sunday, would run in the season's second classic. Irad Ortiz Jr. was booked to ride.

The second leg of the Triple Crown had lost a potential starter Saturday when trainer Kenny McPeek told Horse Racing Nation that Rattle N Roll would not ship to Pimlico. This came after he worked five furlongs in 1:01.4 at Churchill Downs on Saturday.

On Thursday, Zandon, who was third in the Kentucky Derby for trainer Chad Brown, was ruled out of the Preakness by the colt's owners.

Those defections followed Thursday afternoon's surprise announcement that Kentucky Derby winner Rich Strike would not be going to Baltimore. The 80-1 shot at Churchill Downs will have rest and recovery time before pointing to the Belmont Stakes, according to a statement from Rick Dawson. (Read more here.)

Here is an updated review of who is expected for the second leg of the Triple Crown and who is still a maybe. Entries will be drawn Monday at 4:30 p.m. EDT.

Epicenter. The probable favorite galloped Sunday at Churchill Downs and will be vanned to Pimlico on Tuesday.

Secret Oath. The Kentucky Oaks winner galloped at Churchill Downs Sunday morning and will leave Monday for Pimlico, according to the Preakness media team.

Early Voting. He worked five furlongs in 1:00.63 Friday at Belmont Park and is scheduled to be shipped to Pimlico on Tuesday.

Fenwick. The son of Curlin, with a record of 6: 1-1-0, will be ridden in the Preakness by Florent Geroux.

Simplification. Fourth in the Kentucky Derby, he arrived at Pimlico on Tuesday.

Skippylongstocking. The third-place finisher in the Wood Memorial was scheduled to breeze at Gulfstream and then ship to Pimlico for trainer Saffie Joseph Jr.

Armagnac. As first reported Saturday morning by Jay Privman of Daily Racing Form, trainer Tim Yakteen has decided to enter the Quality Road colt in the Preakness. Irad Ortiz Jr. is slated to ride. He won a 1 1/16-mile allowance at Santa Anita on May 8, though his best stakes finish to date was a fourth-place showing in the Santa Anita Derby (G1).

Creative Minister. Trainer Kenny McPeek decided to enter him after a strong allowance win at Churchill Downs on Kentucky Derby day. He is scheduled to van to Baltimore on Tuesday.

Happy Jack. With Tyler Gaffalione picking up the ride, trainer Doug O'Neill will put blinkers back on this colt after his 14th-place finish in the Kentucky Derby. He galloped 1 1/4 miles at Churchill Downs on Sunday morning. and is scheduled to arrive in Baltimore on Tuesday.

Un Ojo. He was a go after a five-furlong, 1:02.0 workout Saturday at Churchill Downs satisfied connections. But on Monday, the bruised foot was "a little warm," turf publicist Jennie Rees posted on Twitter.

Shake Em Loose. He had won 4 of 5 before finishing third in the Federico Tesio, a Preakness prep. Trainer Rudy Sanchez Salomon plans to send the Shakin It Up colt to the James W. Murphy turf mile on Saturday's undercard.

Rattle N Roll. He will not make the trip to Maryland for McPeek either. Rattle N Roll was sixth in the Blue Grass (G1) and hasn't won since the Breeders' Futurity (G1) last year.

Rich Strike. No Triple Crown winner this year, as his connection opted to skip the Preakness.

Zandon. Owner Jeff Drown told the Star Tribune of Minneapolis on Thursday that the Preakness and Belmont Stakes are out for the colt trained by Chad Brown. Drown said he is targeting the Travers (G1) in August at Saratoga.

Ethereal Road. Lukas said that he would bypass the Preakness and start instead in the Sir Barton at 1 1/16 miles on the undercard.

Smile Happy. As reported earlier, McPeek said he's getting "getting a little bit of a workup," and the trainer will back off of him for a bit. He was 12th in the Kentucky Derby after finishing second in the Blue Grass.

The first- and second-place finishers in the Tesio also were ruled out. The winner Joe is going to the James W. Murphy, and Mr Jefferson is pointed to the Sir Barton.