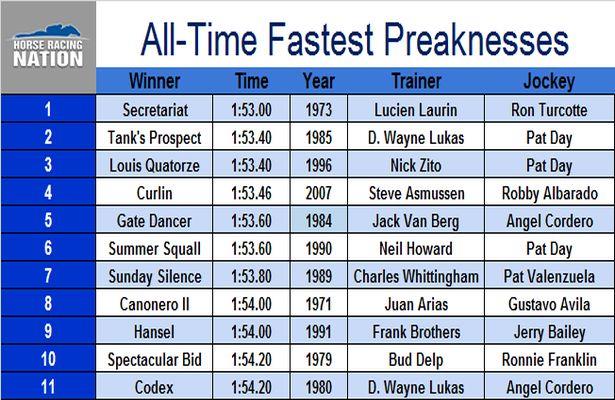 Nyquist not only won the Run for the Roses, but he ran the fastest time since Funny Cide in 2003, who still holds the 10th fastest time for the Kentucky Derby. In just under two weeks, Nyquist will attempt to take the Preakness Stakes, and it will be interesting to see if he runs another fast time. In order to break into the fastest Preakness times since it became the 1 3/16 miles race it is today, the Uncle Mo colt will have to beat the times mentioned here.

1.) Secretariat, 1:53.00, 1973: After winning the Kentucky Derby with a record setting time and putting away his rival Sham by 2 1/2 lengths, “Big Red” moved onto the second leg of the Triple Crown. He broke last, but that didn’t stop him from beating Sham once again by 2 1/2 lengths.

2.) Tank’s Prospect, 1:53.40, 1985: The colt showed potential at two, running second in the Breeders’ Cup Juvenile its inaugural year, and won the El Camino Real Derby and Arkansas Derby at three. The son of Mr. Prospector came into his Preakness win off a seventh place finish in the Kentucky Derby.

3.) Louis Quatorze, 1:53.40, 1996: Louis Quatorze finished second in the Hopeful Stakes and the Futurity Stakes at Belmont his two-year-old season and was runner up in the Blue Grass at three. Come Kentucky Derby day he broke bad and had traffic problems, leading to a 16th place finish. The plan for the Preakness was to send to colt to the lead and slow the pace down. He caught the lead, but set a hot pace and led gate to wire.

4.) Curlin, 1:53.46, 2007: The two time Horse of the Year proved to be a game factor during the 2007 Triple Crown campaign. Coming off wins in the Rebel and Arkansas Derby, he finished third in the Kentucky Derby and beat the winner Street Sense two weeks later at Pimlico in the Preakness. Curlin went on to win the Jockey Club Gold Cup twice, the Breeders’ Cup Classic, the Dubai World Cup, the Stephen Foster Handicap, and the Woodward. He now stands at Hill ‘n’ Dale Farms and has been very successful at stud.

5.) Gate Dancer, 1:53.60, 1984: While the colt proved he could finish well in stakes company, his highest level wins coming into the Preakness were from allowance races. Gate Dancer won three more times during his race career, those victories coming from the Omaha Gold Cup, the Super Derby, and the Cornhusker Handicap.

6.) Summer Squall, 1:53.60, 1990: Summer Squall entered the Preakness with seven wins and two seconds from nine races. Those two defeats, one being in the Kentucky Derby had been to his rival, Unbridled. Summer Squall turned the tables in the Preakness and beat Unbridled by 2 1/2 lengths. After retirement, Summer Squall stood at Lane’s End Farm and sired Charismatic, who won the first two legs of the 1999 Triple Crown.

7.) Sunday Silence, 1:53.80, 1989: Sunday Silence had a rough start before blooming into brilliance. A nasty virus hit him as a weanling, nearly taking his life, and at two he was in a trailer accident when the driver suffered a heart attack and flipped the van. The colt had a stretch of wins before his Preakness victory, taking the San Felipe, Santa Anita Derby, and the Kentucky Derby. He later won the Breeders’ Cup Classic and was leading sire in Japan 13 times.

8.) Canonero II, 1:54.00, 1971: Bred in North Carolina and born with a crooked front leg, it looked like Canonero II would ever do well in racing and was sold to Venezuela. There he became a champion at two before winning both the Kentucky Derby and Preakness. The horse earned Champion Three-Year-Old Colt honors.

9.) Hansel, 1:54.00, 1991: Hansel won the second and third jewel of the Triple Crown, but in the first one he had finished a disappointing tenth. The colt almost skipped the Preakness, but appeared to working great and went on to win and earn Champion Three-Year-Old Colt.

10.) Spectacular Bid, 1:54.20, 1979: A champion at two, three, and four, Spectacular Bid was one tough horse to beat. He won the Preakness by 5 1/2 lengths and looked as if he would win the Triple Crown just one year after Affirmed. However, the colt ran third in the Belmont. His race record included 26 wins out of 30 starts.

11.) Codex, 1:54.20, 1980: It took Codex a little while to break through as a competitive colt, but he made his way to the top after winning the Santa Anita Derby and the Hollywood Derby. John Nerud of Tartan Stable did not want Codex nominated for the Kentucky Derby and was reluctant to let him run in the Preakness, but trainer D. Wayne Lukas convinced him otherwise. Codex ended up winning by 4 3/4 lengths over Genuine Risk, the Kentucky Derby winning filly.