Preakness Stakes 2019: War of Will wins the battle at Pimlico 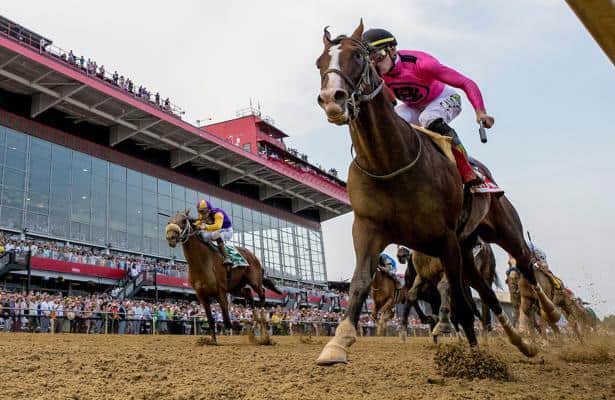 War of Will's trainer, Mark Casse, didn't consider Saturday's Preakness Stakes win some form of redemption. He only wanted "a fair shot" after the colt was involved in a few controversial bumps only two weeks ago in the Kentucky Derby.

War of Will certainly got that, prevailing with a determined run up the rail at Pimlico. Under jockey Tyler Gaffalione, the son of War Front finished 1 3/16 miles in a final time of 1:54.34.

"He showed what he had today," Casse said.

And with a familiar sort of trip.

War of Will again broke from the rail, but he didn't hustle up to avoid the type of traffic faced in the Derby. When it came time to make a move through the far turn, the rail more than opened -- no Maximum Security in the way -- allowing Gary Barber's multiple graded stakes winner through.

From there, the rest were running for second.

Longshot Everfast hit the wire next Owendale third. The race favorite, Improbable, missed the board in a field of 13 for the Triple Crown series' second leg.

War of Will, who ran mid-pack in the early going, was set up by a three-wide pace duel into the first turn with Warrior's Charge, Market King and Anothertwistafate spread across the track. On the inside, Warrior's Charge eventually tired after fractions of 22.50, 46.16 and 1:10.56, but he left the rail open for War of Will's move to the front.

The winner wound up seventh at Churchill Downs. Before that, he nearly missed his trip to the Derby with more trouble, taking a bad step only strides from the gate in the Louisiana Derby (G2).

To open his campaign, however, the former turf runner War of Will won Fair Grounds' Lecomte (G3) and Risen Star (G2) in succession to establish himself on the Triple Crown trail.

Now, what about the June 8 Belmont Stakes?

"I would think probably so," Casse said, though Barber wasn't on hand at the Preakness to confirm.

Bodexpress, the maiden in Saturday's field, tossed jockey John Velazquez when rearing at the start. The rider returned to his feet, though the action resulted in an inquiry settled much faster than in that historic Derby.