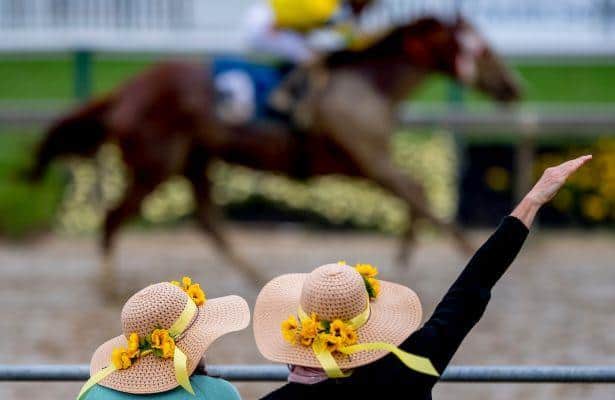 Weather conditions for Preakness Stakes 2018 don’t appear any better than Kentucky Derby day. Rain has drenched Pimlico Race Course throughout the week and is predicted to continue on and off through the day. Justify and Good Magic, the top two Kentucky Derby finishers, proved themselves in the slop two weeks ago and will have another go at each other in a smaller field today.

The Preakness is slated as race 13 and post time is 6:48 p.m. Weather forecasts predict the rain will start moving out of the Baltimore area around race time. The sloppy track has created several scratches throughout the card, including multiple Grade 1 turf winners World Approval and Divisidero. There are no scratches from the eight Preakness horses.

Scratches and other late changes can be viewed on Equibase.

Justify will be the first horse since American Phaorah in 2015 attempting to sweep the Triple Crown.

The Bob Baffert trainee did not disappoint in the Preakness. Good Magic, runner-up to Justify in the Kentucky Derby, took it to Justify and jockey Mike Smith from the start and the two raced head-to-head throughout. Bravazo and Quip were next in line, with Tenfold, Diamond King, Sporting Chance and Lone Sailor rounding out the field.

Good Magic fought down the stretch but folded near the end. Bravazo and Tenfold came running late to catch second and third respectively, looking like they could spoil the win for Justify. The Derby winner had plenty of fight left to stay in front, while Good Magic finished fourth.

It was the seventh Preakness win for Baffert, the second for Smith and the first for owners WinStar Farm China Horse Club, Head of Plains Partners and Starlight Racing. The Scat Daddy colt also remains undefeated in five starts.

Justify wins the second jewel of the #TripleCrown! #Preakness pic.twitter.com/6edTCIXNyF

Trainer Bob Baffert sent Ax Man out to pick up his first stakes victory in the Sir Barton Stakes. Mike Smith was aboard the Misremembered colt owned by Patti and Hal Earnhardt III. Baffert and Smith will also try to take the middle jewel of the Triple Crown with Kentucky Derby winner Justify.

Ax Man was a debut winner in Southern California before finishing fourth in the Grade 2 San Vicente Stakes and returning to win an allowance race. In the Sir Barton, only his fourth start, Ax Man went straight to the lead. Title Ready, Prince Lucky and Navy Commander were close behind while Pony Up and Dream Baby Dream trailed through the fog.

Race 11 (The Very One Stakes, five furlongs off the turf)

Girls Know Best was claimed by trainer Eddie Kenneally with Brian Chenvert during Keeneland’s fall meet. The Caleb’s Posse filly won the Ladies’ Turf Sprint Stakes in January and picked up her second stakes win with The Very One.

if you look closely, there is a horse race behind that fog ?? pic.twitter.com/zvLbWI04ey

Switzerland gave trainer Steve Asmussen and jockey Ricardo Santana Jr. their third win on the Preakness undercard, with Tenfold in the big event three races away. Although it took Switzerland eight races to break his maiden, the Maryland Sprint marks his fourth straight victory.

By Speightstown and owned by Woodford Racing LLC, Switzerland sat behind pacesetter Red Dragon Tattoo and just ahead of Long Haul Bay. Santana asked his mount to move in the turn and they burst to the lead. Long Haul Bay gave chase but only managed a distant second. Lewisfield ran on for third and Irish Colonel was fourth.

The Gallorette was the one turf race left on it’s original surface on the Preakness day card. Ultra Brat, who missed the break and finished 10th in her last race, returned in the Gallorette and picked up her second Grade 3 win this year. The Uncle Mo daughter earned her first in her 2018 debut, the Marshua’s River Stakes.

Off at 8-5 with jockey Jose Ortiz, Ultra Brat sat it second behind Stallion Heiress and ahead of Brooks House, Elysea’s World, Blessed Silence and Lake Ponchatrain. The opening half-mile went in a crawling :25.12 and :51.56 over a soft turf course. Ultra Brat then began grinding away at the lead Stallion Heiress had with Elysea’s World chasing. Ultra Brat was at the front when she straightened in the stretch and remained unthreatened, finishing in a slow 1:53.72. Blessed Silence rallied for second and Brooks House ran down 6-5 favorite Elysea’s World for third.

Trainer Steve Asmussen and jockey Ricardo Santana Jr. picked up their second win of the day with Mitole in the Chick Lang, this time with owners William and Corinne Heiligbrodt. Asmussen and Santana will try to add another win with Tenfold in the Preakness.

Off as the heavy 2-5 favorite, Mitole led every step of the way and set a new Chick Lang record in 1:09.29. The 3-year-old Eskendereya colt put away a pressing Curly’s Rocket in the turn and left everyone else chasing him to the wire. Still Having Fun rallied for second and Clouded Judgement came up the rail for third over Pure Shot, all far back from Mitole.

Half the field scratched with the move from turf to dirt, including multiple Grade 1 winners World Approval and Divisidero and multiple graded stakes winner Frostmourne. Unbridled Juan took the lead with Just Howard, Fire Away and O Dionysus close behind. The order stayed relatively unchanged until the four horses lined up in the homestretch. Manuel Franco saved ground aboard Fire Away and stuck to the rail. Trained by Shug McGaughey, the Phipps Stable homebred proved best over Unbridled Juan and Just Howard. O Dionysus failed to get going in the slop and finished fourth.

It was the third stakes win for Fire Away, who won the Danger’s Hour Stakes last out, and his first graded score. While the Dixie was originally a Grade 2, graded turf stakes moved to the dirt are automatically downgraded one grade until further review by the American Graded Stakes Committee.

Uncle Mojo, the 1-2 favorite, almost had an easy lead at the break. Instead, Deal Driven made a speedy dash to the front from the outside. Jockey John Velazquez settled Uncle Mojo into second over Belfour and Lucky Kick. Deal Driven tried to save ground on the rail but Uncle Mojo began to creep up to his outside in the turn. The Uncle Mo colt was loaded. Velazquez hardly asked his mount to go and the pair won by a double-digit margin under wraps. Belfour and Hollywood Strike emerged to round out the top three with Sidewalk Prophet in fourth.

It's safe to say Uncle Mojo loved the slop at @PimlicoRC. He romped home in Race 6 for Todd Pletcher and @ljlmvel! @DaveRodman

Watch the remainder of the Pimlico card LIVE on https://t.co/RvRTJxJrVd pic.twitter.com/jeW5ufarX9

Originally scheduled for one mile on the turf, Tap Daddy broke through in the James W. Murphy to pick up his first stakes win. Trained by Steve Asmussen, ridden by Ricardo Santana Jr. and owned by Winchell Thoroughbreds LLC, the same connections will try to upset the Preakness later on with Tenfold.

The fourth race was another to lose most of its entrants because of the surface change, dropping from 12 entries to five. American Sailor took a shot at Square Shooter from the break but had no answer turning for home. Jorge Vargas Jr. was aboard the winning mount and the pair kicked away in the slop. American Sailor fell back to finish fourth as Big Bella Brown and Grandiflora ran on for second and third respectively.

Longshot Willie B Mine beat Forge to the lead but it was Forge who was in front when it mattered. Irad Ortiz Jr. was aboard Forge and stalked the pace ahead of Pop Keenan and Happy Farm. The frontrunners were the ones to prevail in the final furlongs. Pop Keenan, who was three-wide through the race, challenged Forge on the outside as Willie B Mine dropped back. Pop Keenan kept pushing Forge but the winner fought harder with every step. Forge, a 4-year-old colt by Harlan’s Holiday, extended his win streak to three since being claimed for $40,000 by trainer Rudy Rodriguez and owner Michael Dubb in December.

The #StanleyCup makes its way to the #Preakness! pic.twitter.com/khFcvkSvOl

The second race went from a 12-horse field to four due to it’s surface change. Conjecture was able to take an easy lead over Clare’s Dowery, Critical Humor and Bring Me Answers. Jockey Gilberto Delgado only had to ask his mount to finish down the homestretch. Conjecture splashed down the rail and pulled away from Clare’s Dowery with ease. The winning daughter of Great Notion earned her fourth win in 18 career starts. Harbortown Stable and trainer Noah Abramson picked up Conjecture up from an October maiden claiming race at Laurel Park before winning with her next time out.

There was no show betting with four horses. Conjecture was worth $4.20 and $2.60 as the even money favorite and Clare’s Dowery, 5-2, placed for $3.40. Bring Me Answers and Critical Humor ran third and fourth respectively.

Hill Shadow took the opener on the Preakness day undercard with jockey Xavier Perez aboard. The 6-year-old Macho Uno gelding battled for the lead with Beeks and R Hot Twentys, settling in between the two. Turning for home it was Beeks and Hill Shadow together on the rail. The two pulled away but Flash Attack started to gain down the center of the track. Hill Shadow ultimately pulled ahead of his challenger and picked up his second career win since hitting the track in 2016. The Robin Graham trainee is a homebred for Mrs. Frank P. Wright.