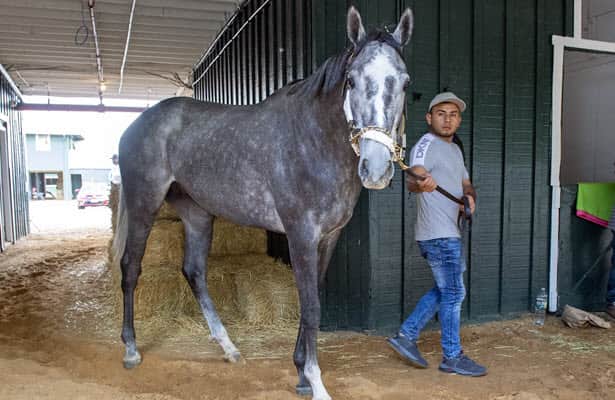 Kenny McPeek knows that with money comes influence. When the decision was made to pay $150,000 to supplement lightly raced allowance winner Creative Minister into Saturday’s Preakness Stakes, he knew the biggest question might be, “Really?”

“My wife (Sherri) and I own 10 percent,” McPeek told Horse Racing Nation Thursday morning outside the stakes barn at Pimlico. “I had to put up our share, too. It makes it easier for them to do it if I’m going to do it.”

The “them” to whom McPeek referred are the main partners in Creative Cause, namely Paul Fireman, who made his fortune leading Reebok, and Greg Back, who sold his trucking business five years ago to start buying racehorses. Fireman and Back have 45 percent each. The McPeeks, under their business name Magdalena Racing, hold 10 percent.

Those very questions were asked right after Creative Minister overcame a hop at the start to power his way to a 2 3/4-length victory in a 1 1/16-mile, $80,000 allowance race on the Kentucky Derby undercard. The Preakness beckoned two weeks later. Effectively anteing their 10 percent – $15,000 of their own money – to back a colt who had raced only three times and never in a stakes, the McPeeks said why not?

“I do this a lot,” Kenny said. “It makes it easier on my partners when we have equity. My clients give me equity in place of a commission. So I have sweat equity involved, and there’s no motivation to buy an average horse. I think it encourages the clients to buy horses with me.”

It is like profit sharing or stock options for corporate employees. Kenny compared it with something Hall of Fame football coach Bill Parcells said in 1997. It happened when New England Patriots owner Robert Kraft would not add general manager to Parcells’ role as head coach.

“They want you to cook the dinner,” Parcells said. “At least they ought to let you shop for some of the groceries.”

McPeek and Parcells are friends, so he had that line ready to go Thursday.

“I thought that was a great quote that Parcells made,” McPeek said. “I’m a bit of an anomaly in the sense that most owners have bloodstock agents that buy the horses, and then they transfer them to trainers. It’s the same dynamic. If you want me to win for you, then let me buy the groceries. And I’m pretty good at it.”

Kenny spotted Creative Minister as a yearling at a Keeneland sale nearly two years ago. Acting on behalf of his partners, he paid $180,000 for the Creative Cause colt, who was bred by Dell Ridge Farm in Lexington, Ky. At first, it did not look like a good buy. But the McPeeks have been down this road before with young horses.

“Every year Paul Fireman and Greg Back buy groups of yearlings,” Kenny said. “The best way to look at it is this yearling didn’t work out. It’s normal. But for every Creative Minister, there’s another colt that didn’t make the races or bowed a tendon or had a throat issue.”

In the case of Creative Minister, he finally made his racing debut March 5 by finishing a close second as a 5-2 favorite in a seven-furlong, maiden sprint at Gulfstream Park. A month later on a sloppy track at Keeneland, he added Lasix, stretched to 1 1/16 miles for a $100,000 maiden breaker as an 8-5 favorite. That led to the allowance win at 7-2 odds nearly two weeks ago at Churchill Downs that opened his owners’ eyes – and not only the McPeeks’.

“Kenny and I were really excited about it,” Back told the annual Preakness Alibi Breakfast on Thursday morning. “We got the Equibase speed figure, and it was 108. That excited us. Then we’d seen that Rich Strike rated a 106 (for winning the Kentucky Derby). I’m a gambler at heart. Let’s roll ’em.”

Making a stakes debut in a Triple Crown race might seem daunting and even good reason for handicappers to fade a horse. Not so for the McPeeks.

That, of course, would be Swiss Skydiver, the filly who suffered a tough loss in the Kentucky Oaks (G1). Despite that, the McPeeks entered her into the COVID Preakness less than 20 months ago. At odds of 11-1, she pulled off the upset.

There is a reason why Swiss Skydiver was not on the list of the McPeeks’ ownership successes.

“Unfortunately, I didn’t have a piece of Swiss Skydiver, because my accounting team messed that up,” Kenny said in a deadpan jest of his wife, who is every bit his partner in the Thoroughbred business. That is in addition to being a mom to their 6-year-old daughter Annie and five other children from previous marriages.

“We have grandchildren older than our 6-year-old,” Sherri said.

When Creative Minister breaks from post 2 on Saturday, he will bring less experience to the Preakness than seven of his rivals. Possible pacesetter Early Voting has been just as lightly raced, but he has first- and second-place finishes in graded stakes on a racing résumé that dates to last fall.

“Those horses have been running all winter,” Kenny said. “They’ve been running really hard, and they’re really talented. You’ve got to hope that they regress a little bit. Maybe that means that they don’t run on the top of their game.”

So for owners who making what amounts to about a 5-1 bet to win a $990,000 first prize – or 1-5 to hit the board and win back the supplement fee plus another $31,500 – McPeek is saying there’s a chance. At least if Derby runner-up Epicenter and the others do not have their “A” game.

“If they do, they're going to be tough to beat,” he said. “If they don't, then it opens it up for maybe an outsider.”

Which is why Creative Minister will be in the gate Saturday.

“We should definitely give him a chance,” Sherri said.