Preakness: Brown has 'a lot of confidence' in Risk Taking bounce-back 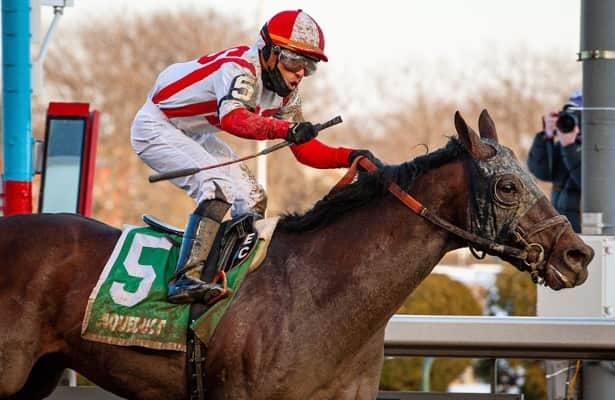 Seven horses from four-time Eclipse Award-winning trainer Chad Brown got their first looks at Pimlico Wednesday morning, including his two Preakness Stakes entrants, Crowded Trade and Risk Taking, both of whom are owned by Seth Klarman’s Klaravich Stables Inc.

Under the supervision of Brown’s assistant, Jose Hernandez, both horses galloped a mile and a quarter on Wednesday and will do the same on Thursday.

Brown, who is in New York, said he expects to be in town on Friday.

Crowded Trade is coming off an encouraging third-place finish in the Wood Memorial (G2) at Aqueduct Race Track on April 3. Risk Taking, the 5-2 favorite in the Wood, was a head-scratching seventh in the nine-horse field.

“Crowded Trade ran a really good race in only his third start,” Brown said. “He did hang a little bit in the lane, but he made up a lot of ground after breaking bad. Risk Taking was quite a disappointment that day. He was coming into the race in excellent form and his numbers were heading the right way. He just didn’t fire.”

Brown said Risk Taking, a son of Medaglia d’Oro, did take a lot of kickback in the Wood. The following day, he said the colt had one eye closed.

“Clearly, the kickback impacted him to some degree,” Brown said. “Whether that fully explains why he just quit in that race, I will never be certain of it. I am just going to draw a line through that race. I just hope he can get back to his race in the Withers, which would put him in contention here.”

Risk Taking won 1 1/8 mile Withers on Feb. 6, also at Aqueduct, by 3 3/4 lengths. Both Brown horses will have new riders on them, but they are two of the trainer’s go-to jockeys.

Hall of Famer Javier Castellano will be on Crowded Trade, while Jose Ortiz will ride Risk Taking.

“I have a lot of confidence in both of them,” Brown said.