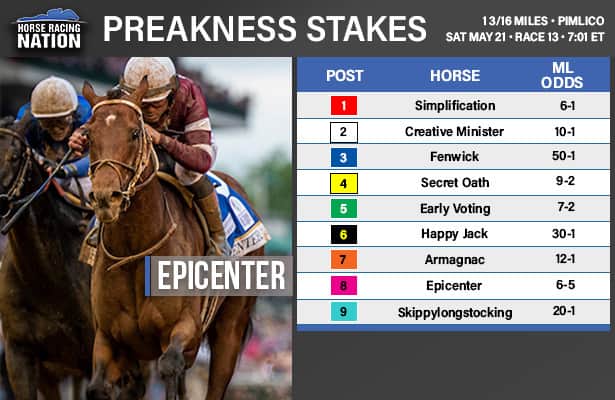 If not for an unlikely rail trip by 80-1 long shot Rich Strike in the Kentucky Derby, then Epicenter would be the undisputed center of attention in the buildup to Saturday’s $1.65 million Preakness Stakes at Pimlico Race Course. Now, instead of being a candidate for a possible Triple Crown, he is merely the favorite.

After losing the lead in the last 10 strides to finish second in the Derby, and with Rich Strike not going to Baltimore, Epicenter drew post 8 in the field of nine. He was made the 6-5 morning-line favorite at Monday’s post-position draw at Citron Restaurant and Bar in Baltimore.

Get a jump on Preakness, Black-Eyed Susan undercards.

Two new shooters who were not in the Derby, Kentucky Oaks (G1)-winning filly Secret Oath (9-2) in post 4 and Wood Memorial (G2) runner-up Early Voting (7-2) in post 5, were predicted to attract a lot of betting attention for the 1 3/16-mile classic.

Sired by Arrogate, trained by six-time Preakness winner D. Wayne Lukas and ridden by Luis Sáez, Secret Oath could become the second filly in three years to win the race. Swiss Skydiver did it for trainer Kenny McPeek in 2020, when the Preakness was postponed 4 1/2 months because of the COVID outbreak.

Early Voting had the points necessary to qualify for the Derby, but trainer Chad Brown decided to give the Gun Runner colt six weeks between starts. José Ortiz, who has ridden all three of Early Voting’s races including maiden and Grade 3 wins, will ride again Saturday in what will be the colt’s first start away from Aqueduct.

A Not This Time colt, Simplification (6-1), could be the fourth-most popular betting interest Saturday. The Fountain of Youth (G2) winner who finished fourth in the Derby drew the rail post. He is trained by Antonio Sano. With Ortiz switching to Early Voting, John Velázquez has been called to take the ride in the Preakness.

This was the draw for the Preakness field with morning-line odds from Maryland Jockey Club track handicapper Keith Feustle. The race was posted for Saturday at 7:01 p.m. EDT.