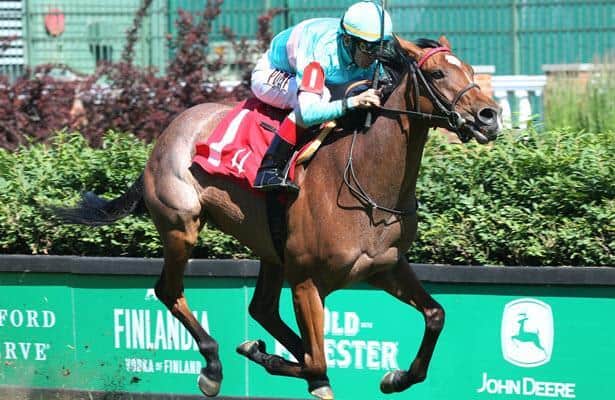 There appear to be many short prices on tap on Saturday at Pimlico, but that doesn't mean there is not ample opportunity to make money.

Leveraging the right horses with the obvious contenders can turn a 2-1 winner into a $90 trifecta. Here is a closer look at four races that feature the right mixture of reliable runners and value plays to turn a nice profit with these suggested exotic plays.

Evan Harlan is going to take plenty of action for Graham Motion after a pair of solid efforts in New York. He deserves to be the favorite and is tempting to single, but he did just lose at odds on and there is one other horse that I am very intrigued by as well. Airspeed Velocity seems like a well-meant runner who has yet to put it together. James Toner is a good but patient trainer who does not win 5-furlong turf sprints on debut. That is why it is interesting that this son of More Than Ready went off at only 6-1. He ran decently, finishing fifth out of 12. He looked prime for his second start after being gelded, adding blinkers and stretching out at Keeneland. His chances were finished at the start after breaking horribly and then pulling under a stranglehold throughout. That race is a toss, and I believe there is upside and ability with this runner who has faced quality competition.

At 10-1, I recommend a nice exacta box with Airspeed Velocity and Evan Harlan.

Technical Analysis and Crystal Cliffs are the standouts in this field, and to maximize leverage, it is best to take a stand with one of these runners. Crystal Cliffs showed tons of promise when first coming to America and really put it together with a powerful win while making her first start of the season in the Sand Springs Stakes. In contrast, Technical Analysis disappointed in her first start against older foes at low odds. Both runners have solid form to lean on, but I trust that Crystal Cliffs has taken a step forward this year and offers a better price. Karakatsie is not as talented as the top two runners, but her 3-year-old form was good and if she matures as a 4-year-old, she should be right there at 12-1. Scarabea and In a Hurry are the only other horses who stand a chance.

With that said, I suggest superfectas with Crystal Cliffs on top, Technical Analysis second, Karakatsie keyed third and fourth and Scarabea and In a Hurry in the remaining spots.

B Dawk was cut out to be a nice horse after selling for $425,000 but had yet to fulfill his promise until Doug O'Neill removed the blinkers in his last start. He dominated his foes at Keeneland in a performance that was impressive both visually and on the clock. He should enjoy stretching out, and it seems he just needed an equipment change all along. Expect him to repeat in this spot.

I see B Dawk and Epicenter as singles in all sequences. The race in between is a grab bag turf sprint that could yield a price. I will bet a pick 3 singling B Dawk in the 11th race, going very deep in the 12th race, and singling Epicenter in the Preakness.

As mentioned above, Epicenter will be very tough to beat in the Preakness. He is the most talented and consistent runner in the field and should sit an ideal trip at a distance that should be slightly better for him than the Kentucky Derby. Secret Oath and Creative Minister are a pair of intriguing runners with the upside and ability to be right in the mix. Simplification might be a step below the elite, but he does not know how to run a bad race and should be an underneath factor in the exotics.