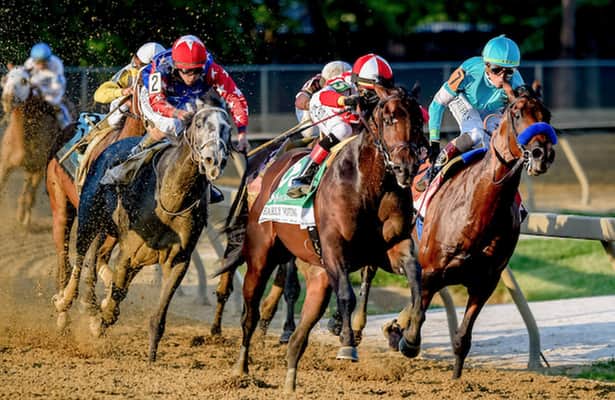 On a surface that was very kind to forwardly placed types all day, Early Voting pressed an eager Armagnac through the par-like fractions, accurately predicted by the Super Screener, and scored an impressive Preakness victory at odds of nearly 6-1.

Epicenter, Creative Minister and Secret Oath completed the Superfecta, and those were the top four ranked horses by the Super Screener.

Although the top four finishers wouldn’t have changed, the order in which they finished would likely have been altered had not Epicenter and Secret Oath encountered terrible trips. The connections of both were visibly upset with the rides their charges received – especially those of Epicenter.

As the gates opened, Epicenter lacked a strong early foot. As Joel Rosario was trying to get through a seam between Skippylongstocking and Armagnac, the latter horse came over on him, causing him to get squeezed back. Then he was pinballed by Skippylongstocking and Happy Jack, losing more ground as he got shuffled back to next-to-last as they headed into the first turn.

For a presser type, that was a disastrous beginning, especially since the pace was moderate and the surface was glib. Once he recovered, Epicenter showed his quality by closing resolutely for second. Just as in the Kentucky Derby, one could argue this horse ran the best race. This colt will not go to the Belmont Stakes and instead will be pointed to the Travers in August.

An even more devastating trip beset the fourth place finisher, Secret Oath. Read this description of her trip from the official results chart:

“Secret Oath brushed at the break, checked sharply between rivals when put in tight by Happy Jack in the opening sixteenth, recovered and was taken wide in the backstretch, lost ground four wide past the five eighths, circled five wide under pressure…”

In my estimation, this filly lost at least four lengths, given getting dusted at the start and then going very wide around the final turn. This cost her at least a third-place if not second-place finish in the race. This winner of the Kentucky Oaks proved she belongs right up there with the best of the 3-year-old male crop. She’ll be given a couple of months break and is being targeted for a run nine weeks from now in the Coaching Club American Oaks (G1) at Saratoga.

Once again the pace horse was nowhere to be found at the conclusion of this edition of the Preakness, and two closers and one off-the-pace horse completed the “under” positions in the Superfecta. Epicenter is a presser type but because of the trouble encountered early, he had to close from second to last to finish second. 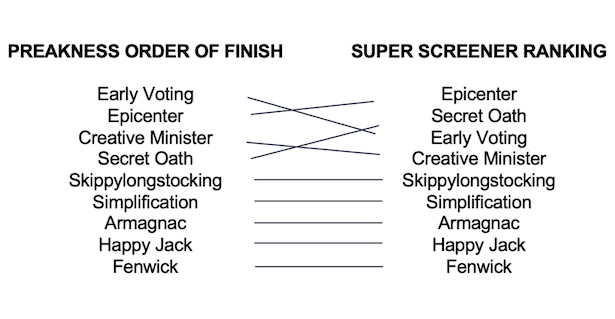 Looking ahead to the Belmont Stakes, we’ll see the return of the Kentucky Derby winner, Rich Strike, and he will be joined by fellow Derby runner Mo Donegal out of the Todd Pletcher barn. Out of the Preakness race, Creative Minister is a definite go for the Belmont and connections of Skippylongstocking are intent on heading to New York as well. The winner of the Peter Pan (G3), We the People, is a possibility as is Nest, the runner up finisher of the Kentucky Oaks.

With three weeks to go to the Belmont Stakes, the field will continue to take shape in the coming days, and we’ll be tracking it all. We'll get the early edition of the Belmont Stakes Super Screener out a week before the running of the third jewel of the Triple Crown.

Many thanks to all of our subscribers as we look forward to a successful Belmont Stakes outcome.