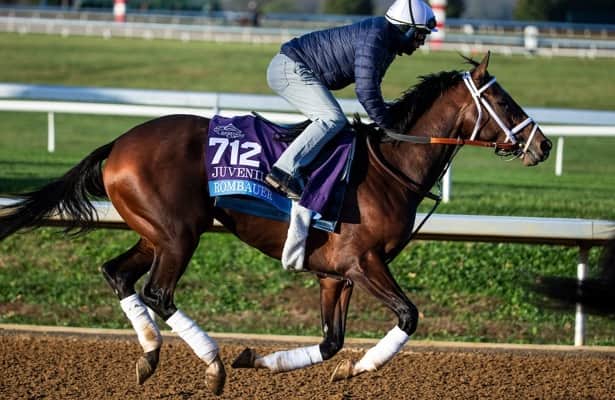 Rombauer and trainer Mike McCarthy were up and out early Wednesday, the colt’s first full day at Pimlico Race Course, to prepare for the Preakness Stakes on Saturday.

McCarthy took a red-eye flight from California Monday night so he could be at the track when Rombauer completed his cross-country flight to Baltimore on Tuesday afternoon. Everything has gone according to plan, McCarthy said, after the colt galloped 1 1/4 miles at 6:30 a.m. EDT.

“The horse is a pretty easy keeper.” McCarthy said. “He shipped in good order and got over the racetrack fine this morning.”

Rombauer, a son of Twirling Candy, broke his maiden on turf as a 2-year-old in July and was Grade 1-placed on dirt when second in the American Pharoah at Santa Anita in September. He won the Feb. 13 El Camino Real Derby, a Preakness win-and-in automatic qualifier, over the artificial surface in his 2021 debut at Golden Gate Fields. He was third in the Blue Grass (G2) on dirt in his most recent start at Keeneland on April 3.

In the Preakness, John and Diane Fradkin’s homebred will start from Post No. 6 under new rider Flavien Prat.

The part performances of trainer Bob Baffert’s two runners – Medina Spirit, who led from start to finish in the Kentucky Derby (G1), and Concert Tour – and Steve Asmussen’s Midnight Bourbon would lead many handicappers to conclude that there is likely to be a sharp early pace.

“The Triple Crown races are always a little bit faster than your average everyday race,” McCarthy said. “I would imagine that there will be a pretty good show on into the first turn. The same gentleman probably has two horses that are going ahead and set the tempo for everyone. We’ll see what happens there.”